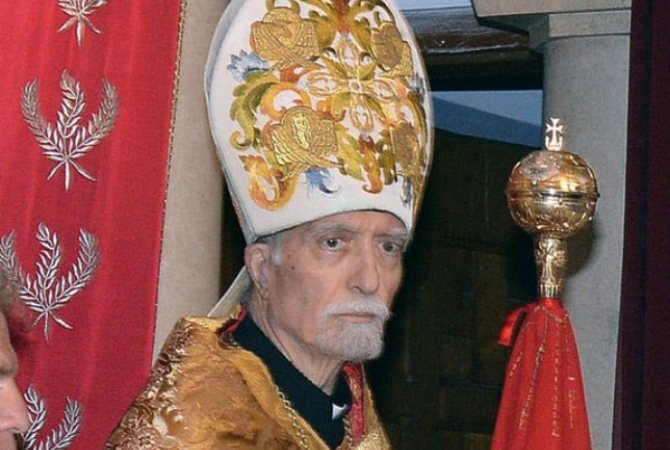 Nerses Bedros XIX was born in Cairo, Egypt, Jan. 17, 1940, he was the 5th of a family of 8 children. He completed his primary and secondary studies in "Les Collèges des Frères des Ecoles Chrétiennes" in Cairo. Feeling very early the vocation for priesthood, he was sent to "Collège Pontifical Léonien Arménien de Rome" in 1958, where he studied Philosophy and Theology at "Université Pontificale Grégorienne".
His was ordained priest in Cairo on Aug. 15, 1965 by His Excellency Msgr. Raphael Bayan. He served the parish of the Armenian Catholic Cathedral in Cairo from 1965 to 1968 with the R. Father Hovannes Kasparian who became Catholicos Patriarch under the name of Hovannes Bedros XVIII in 1982. From 1968 till 1990, he became pastor of the parish of Heliopolis (Cairo), where he encouraged the various religious movements. On Feb. 18, 1990, he was consecrated bishop of the Eparchy of Alexandria for the Armenian Catholics of Egypt and Sudan by His Beatitude Hovannes Bedros XVIII. From 1992 to 1997, as a member of the Catholic Hierarchy of Egypt, he occupied the position of Secretary General of the Pastoral Council of the Catholic Church of Egypt. On Oct. 7, 1999, he was elected Catholicos Patriarch of Cilicia of the Armenian Catholics by the Bishops of the Saint Synod of the Armenian Catholic Church, and was named Nerses Bedros XIX. He was enthroned on Oct. 24 the same year. He received the Ecclesiastical Communion from His Holiness Pope John Paul II on Dec. 13, 1999.
As a member of the Synod of the Bishops of the Armenian Catholic Patriarchal Church, he became successively: Member of the Council of the Bishops of the Patriarchal Curia from 1993 to 1995, President of the Patriarchal Commission for the Vocations from 1993 to 1995, Member of the Permanent Synod from 1994 to 1999.

During his 6 years of office, His Beatitude made pastoral visits to the following countries: Melbourne and Sydney in Australia, Poland, Sweden, Jordan, Ukraine, Iran, Kessab and Aleppo in Syria, Jerusalem, Brazil, Uruguay and Argentine in Latin America. He also boosted the Armenian catholic schools and encouraged the media, especially by reediting the monthly magazine "Massis" and by republishing the bulletin for the Sunday celebrations. On Oct. 7, 2001 on request of His Beatitude and on the occasion of the 1700th anniversary of the Christening (Baptism) of Armenia, the archbishop of Mardine Ignace Maloyan, martyr of the Armenian genocide of 1915, was proclaimed Blessed by His Holiness Pope John Paul II at St. Peter's Square in Rome. In Feb. 2002, His Beatitude Catholicos Patriarch sent the first parish priest to Moscow in order to begin a new mission among the Armenian Catholics in Russia, following the opening in 1991 of missions in Armenia and Georgia.

On Jamuary 2005, by the request of His Beatitude, the Holy Pontiff Jean Paul II gave his blessings on the opening ceremony of the statue of St. Gregory the Illuminator placed in one of the exterior niches of St. Peter basilica. In July 2006, His Beatitude visited Karabakh. This was a historical event because it was the first time in history that an Armenian Catholic Patriarch visited the Republic of Karabakh. In February 2008, by the initiative of His Beatitude, the Holy Pontiff Benedict XVI performed the opening ceremony and blessed the St. Gregory the Illuminator square in the presence of ecclesiastic and political figures that came from Rome as well as from all parts of the world.