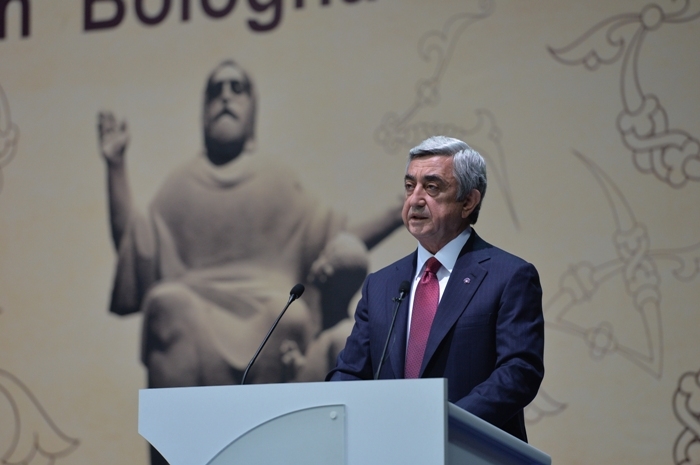 
YEREVAN, MAY 14, ARMENPRESS. The President of the Republic of Armenia Serzh Sargsyan attended the opening of Ministerial Summit of the European Higher Education Area and the Fourth Bologna Policy Forum. The ceremony was held in capital Yerevan’s Karen Demirchyan Sports and Concerts Complex on May 14. The Mass Media and Public Relations Department of the Armenian President’s Office informed “Armenpress” that the Serzh Sargsyan addressed the participants and particularly underscored:

“Distinguished participants of the Ministerial Conference of the European Higher Education Area,

It is an honor to greet you on behalf of the Republic of Armenia on the occasion of this very important event for the European Higher Education Area.

The higher education is, obviously, the pillar upon which the knowledge-based societies are built. In this context, the Bologna reforms transformed the nature of the European higher education ensuring student mobility and establishing wide diversity of educational opportunities. It is also obvious that it is impossible to guarantee a competitive educational system without overcoming systemic problems both in Armenia and in the European Higher Education Area. Armenia had acceded to the Bologna process back in 2005, and by that it designed a new platform of cooperation opportunities with the European area and attained new mechanisms to take advantage of the best international practices.

Current economic and social issues are, meanwhile, serious challenges to the European Higher Education Area, and its common goals presuppose joint efforts and active engagement. For the developing societies, at this stage of advancing information technologies, it is more than important to apply compatible standards in order to address positively the labor market demands, as well as productive cooperation of the beneficiaries in the area of education.

The European education system represented by the Bologna process has made a significant contribution to the reforms carried out in various other regions of the world through numerous education projects, political and institutional dialogue. Assumption of the Bologna Secretariat by Yerevan back in 2012 had been an achievement for the Armenian education system, one that envisaged both responsibility and privilege. It provided the Armenian higher education institutions with an opportunity to share and practice European education values and get better integrated into this process.

Positive and progressive trends have been registered in our higher education institutions related both with the application of the European quality standards and student mobility. The Armenian culture of education, which originates in the antique times as a part and parcel of our country’s ancient history, has always presented itself to the world with its achievements.

The Armenian nation cultivates exceptional esteem toward knowledge and education. That is, probably, due to its millennial history, throughout which it had been plundered, pillaged and persecuted, and its very knowledge and centuries-long spiritual and cultural heritage had been the only value that illuminated its path, and of which it could not have been deprived of. It is no coincidence that during the most difficult days of the Armenian Genocide Armenians had been saving books. Otherwise, we should have not possessed Matenadaran that is the warranty for the eternal existence of the Armenian nation.

Nowadays the creative talents of the Armenian nation, its contribution to the development of global science, arts, theology is being evaluated anew, and it both serves as a source of great pride and indebts us significantly. The last such wonderful event took place recently, when Pope Francis declared the Armenian titan of medieval thought Divine Saint Gregory of Narek, a Doctor of the Universal Church, one of the 36 greatest thinkers recognized by the Catholic Church throughout its 2000 year-long history.

To build upon one’s own educational traditions today one needs accessible and adequate tools for contacts and communication throughout the whole European Higher Education Area. In that context the Bologna process-driven reforms significantly supported founding of a student-oriented system and efforts that provide the today’s younger generation with an opportunity to be well-equipped and competitive to respond to current challenges. Although we have not overcome yet all the obstacles we encountered but the accomplishments registered, and the will to achieve the global goals presupposes new cooperative signals and a more active stage of dialogue.

Education is not an aim in itself, and its vocation is to serve global values and goals. Today, in the 21st century we witness in the civilized world numerous acts of terrorism, violence and war.

Indisposition of human reason and values make such unacceptable manifestations inevitable. Therefore, education based upon spiritual, scientific and cultural content shall be directed at the neat development of the human resources in a broader context.

This year has been special for Armenia, Armenians and the whole civilized world: we have marked the Armenian Genocide Centennial, paid tribute to the memory of our innocent martyrs, and attempted to build a more secure environment for people and nations. We declare “never again” not to let such a horrible crime to recur, to preclude formation of an environment conducive to it as such, to transform general notions and precepts of humanity and civil coexistence, to build societies free of xenophobia. It is obvious that here education has a significant role to play, and it is the mission that you, distinguished participants, pursue.

I avail myself of this opportunity to welcome you, and wish you success with this Ministerial Conference of the Bologna process. I believe that important decisions you are going to make in Yerevan will have a positive impact on the millions of the European students, and all education beneficiaries, thus paving the way for new progress, economic development and stability.