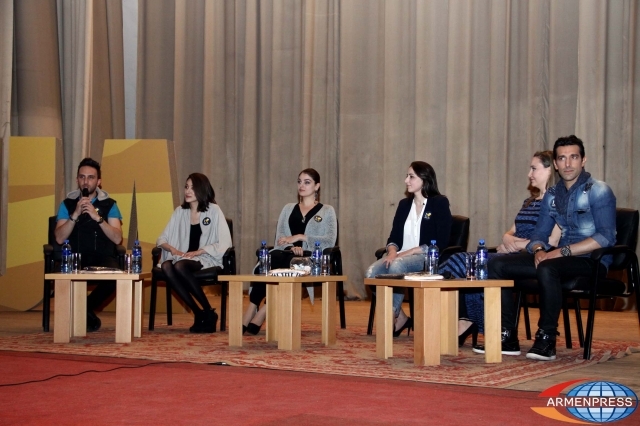 
YEREVAN, 6 MAY, ARMENPRESS. Members of the Genealogy group to be representing Armenia at the 2015 Eurovision Song Contest wouldn’t mind continuing their collaboration and writing new songs together. This is what one of the members, Vahe Tilbian mentioned during a May 6 meeting with students of the American University of Armenia. During the meeting, the members of the group shared their family stories with jokes.

Member of Genealogy Esayi Altunyan emphasized that he travels a lot and meets students of various universities, but is impressed with the eyes of Armenians.

“My mother is a musician. She would sing lullabies for me. She taught me how to play the piano when I was three years old. At 15, I already knew that I wanted to become a musician. I’m happy to be participating in the contest and to be performing with my new family. We’re ready to rock the stage,” Essai Altunyan mentioned and promised to leave a great impression, as “Armenpress” reports.

Member Inga Arshakyan said she and the members of the group are trying to present a small part of the centuries-old history of the Armenian people and assured that being a member of the group was like a dream for her.

Stephanie Topalian emphasized that she was half-Armenian and half-Japanese and that she was impressed when she saw people in Armenia speak Japanese as well.

“The Genealogy group will give the best performance on stage. We will send the message of love and peace through our song,” Stephanie Topalian mentioned.

During the meeting, the students of the American University of Armenia performed numbers and the members of Genealogy sang a song.