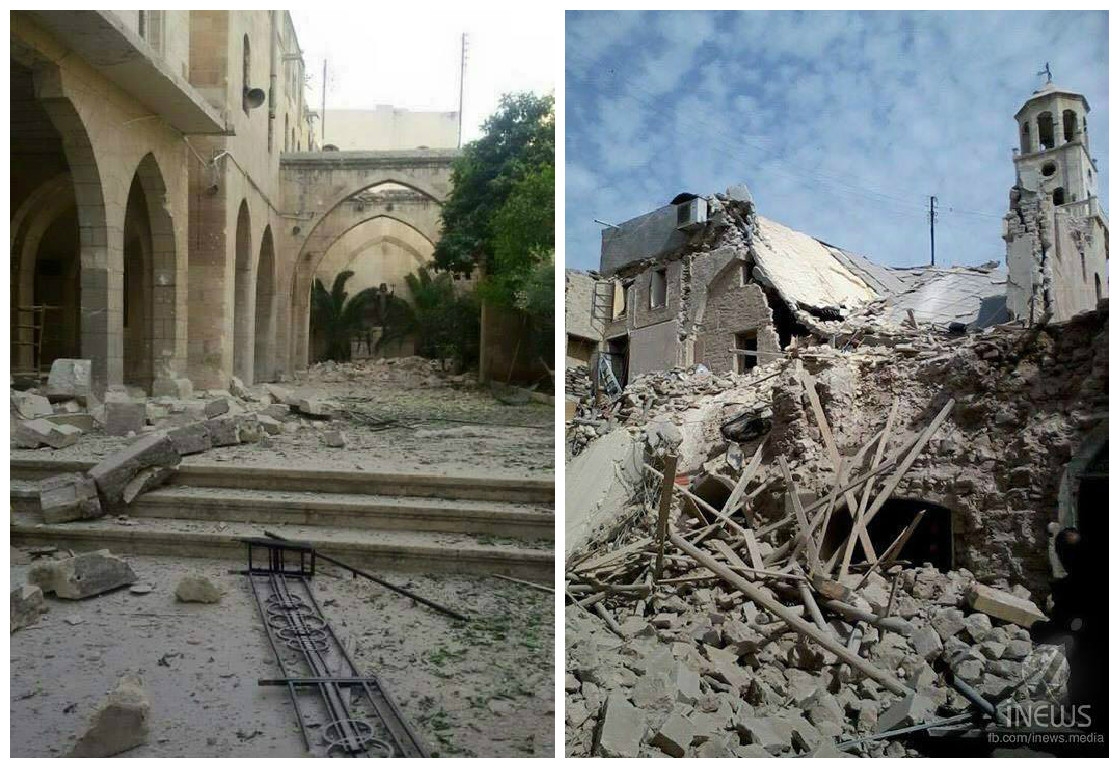 
YEREVAN, 29 APRIL, ARMENPRESS. The Forty Martyrs Church of Aleppo was destroyed due to the bombing.  Our Syrian source informed "Armenpress" about this. The photos of the destroyed Church are spread in the internet.

Earlier, the Speaker of the National Primacy of Aleppo Zhirair Reisian informed, that on the afternoon of April 26, the neighborhood quarter of the Holy Forty Martyrs Church has been subjected to the bombing.

The Armenian Church of the Forty Martyrs in Aleppo was mentioned 1476, in the second edition of the book The Exploit of the Holy Bible, written by Father Melikseth in Aleppo.

However, the current building of the Church was built and completed in 1491 to replace a small chapel in the old Christian cemetery of the Jdeydeh quarter. The Church was named in honour of a group of Roman soldiers who faced martyrdom near the city of Sebastia in Lesser Armenia, and were all venerated in Christianity as the Forty Martyrs of Sebaste. At the beginning, the Church was of a small size with a capacity of only 100 seats. In 1499-1500, the Church went under large-scale renovations. Within 2 years, it was enlarged and a new prelacy building of the Armenian Diocese of Beroea was built in the Church yard, funded through the donation of an Armenian elite named Reyis Baron Yesayi. During the following years, Forty Martyrs Cathedral frequently became a temporary seat of many Armenian catholicoi of the Holy See of Cilicia.

Until 1579, the cathedral was surrounded with the tombstones of the Armenian cemetery, when the cemetery was moved and only clergymen and the elites of the community were allowed to be buried in the Church yard.

The Forty Martyrs Cathedral was renovated again in 1616 by the donation of the community leader emir Khoja Bedig Chelebi and the supervision of his brother Khoja Sanos Chelebi. By the end of the same year, the Church was reopened with the presence of Catholicos Hovhannes IV of Aintab (Hovhannes 4th Aintabtsi) and Bishop Kachatur Karkaretsi.

In 1624, as a result of the growing number of Armenian residents and pilgrims, the Armenian prelacy started to build a quarter near the Church, which is still known with its original name Hokedoun (Spiritual House). It was designated to serve as a rest-house with 23 large rooms for the Armenian pilgrims on their way to Jerusalem. The Hokedoun was built by the donation of Khoja Gharibjan.

The Italian explorer Pietro Della Valle who visited Aleppo in 1625, has described the Church as one of the four Churches that were built adjacent to each other in one yard with one gate, in the newly created Jdeydeh Christian quarter. The other three Churches are the Greek Orthodox Church of the Dormition of Our Lady, the Holy Mother of God Armenian Church (the current Zarehian Treasury) and the old Maronite Church of Saint Elias.

Currently, the cathedral has 3 altars, an upper story built in 1874 and a baptismal font placed in 1888.

The Church never had a belfry until 1912, when a bell tower was erected by the donation of the Syrian-Armenian philanthropist Rizkallah Tahhan from Brazil. During the 2nd half of the 20th century, the interior of the Church underwent massive renovations to meet with the requirements of traditional Armenian Churches. On 28 May 1991, by the donation of Keledjian brothers from Aleppo, a khachkar-memorial was placed in the Churchyard commemorating the victims of the Armenian Genocide.

On 26 April 2000, the Armenian community of Aleppo marked the 500th anniversary of the first enlargement of the Church under the patronage of Catholicos Aram I, during the period of Archbishop Souren Kataroyan.