First US Ambassador to Armenia dies 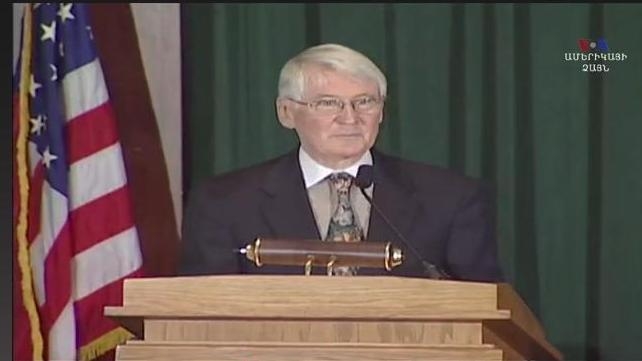 YEREVAN, APRIL 27, ARMENPRESS: The first Ambassador of the United States of America to the Republic of Armenia Harry J. Gilmore of Dumfries, VA, died of a heart attack on April 23, 2015 at the age of 77. Armenpress reports, citing the Voice of America that the authoritative diplomat was contributing to the establishment of peace in the South Caucasus till the end of his life.
He retired in 1997 as a Foreign Service officer after a 36 year career in the United States Foreign Service. The Ambassador Harry J. Gilmore served as a Dean of the Senior Seminar of the Foreign Service Institute from 1996 to 1997 and Dean of Area Studies from 1995 to 1996. Ambassador Gilmore served as a Foreign Service Officer of US. He had a 35 year career in the United States Foreign Service and held a number of senior positions.
He served as the first U.S. Ambassador to the Republic of Armenia from May 1993 to July 1995. He served as a Deputy Commandant for International Affairs of U.S. Army War College from 1991 to 1992 and U.S. Minister and Deputy Commandant of the American Sector, Berlin from 1987 to 1990. Following the reunification of Germany, he served as a Principal Officer of the U.S. Embassy Office, Berlin from 1990 to 1991.
He served as a Deputy Chief of Mission, U.S. Embassy, Belgrade from 1981 to 1985 and Director of the Office of Central European Affairs of U.S. Department of State. His other overseas postings included Munich, Moscow, Budapest and Ankara. His final assignments as a Foreign Service Officer were devoted to the education and training of Foreign Service and other U.S. Government personnel assigned abroad.
He has been a Director of Global Gold Corporation since January 1, 2007. Ambassador Gilmore received a B.A. Degree from the University of Pittsburgh. He did his graduate work in Russian and East European studies at Indiana University and George Washington University.