People in Istanbul demand from Turkey to recognize Armenian Genocide 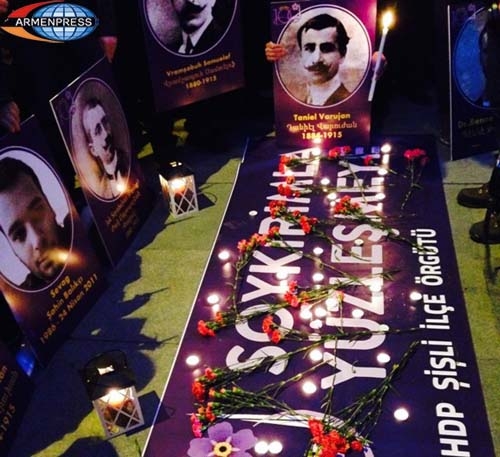 
YEREVAN, 24 APRIL, ARMENPRESS.  Numerous Turks, locals and Armenians from abroad have gathered in Istanbul's Sultanahmet Square and demand from Turkey to recognize the Armenian Genocide, apologize and compensate.

The meeting, which is initiated by Turkey's Human Rights Organization, was held at the place where the Armenian intellectuals were imprisoned before sending to the death march. As the correspondent of “Armenpress” reports, the organizations noted, that although there is no one in their families who have killed the Armenians, but they are the grandchildren of the perpetrators of the genocide, who feel the entire shame and moral responsibility of the events on their shoulders. "Our precise demand is the recognition, apology and compensation of the Armenian Genocide. This old building was the palace of Ibrahim Pasha, which became the prison of the Armenian intellectuals during the Armenian Genocide”.