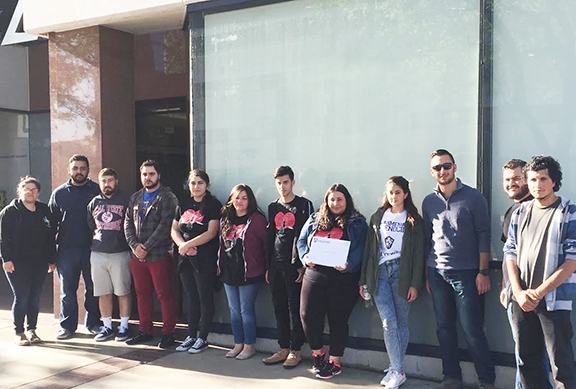 
YEREVAN, 18 APRIL, ARMENPRESS. Members of the Armenian Youth Federation (AYF) held a demonstration in front of the German Consulate in Los Angeles calling on the government of Germany to follow the lead of the European Parliament in adopting a resolution commemorating the Centennial of the Armenian Genocide and urging the Turkish government to come to terms with its violent past, as “Armenpress” reports, citing the periodical “Asbarez.

“Having atoned for the dark chapter in their own history, Germany has led efforts to condemn genocide since the Holocaust of World War II,” said Joseph Kaskanian, a member of the AYF Central Executive. “In light of their efforts, it is a moral imperative for them to condemn the Armenian Genocide for what it is. Instead, the German government has taken a step backwards in their progress by avoiding the use of the word genocide to describe the events of 1915.”

AYF and ARF youth organizations across the globe have held demonstrations in front of German consulates and embassies in recent weeks, calling for justice, recognition and restitution. AYF members in Los Angeles took part in the worldwide effort, delivering a letter to the German Consulate that presses the government to pass the resolution.

“Other countries — those who value justice over politics — plan to commemorate the centennial of the genocide by confronting the true version of history,” Kaskanian said. “The euphemisms and deceitful diplomacy displayed by the German government will never allow for justice and closure for the Armenian Genocide.”

Founded in 1933, the Armenian Youth Federation is the largest and most influential Armenian American youth organization in the world, working to advance the social, political, educational and cultural awareness of Armenian youth.