Tragedy in the Sea: Muslims accused of killing Christians 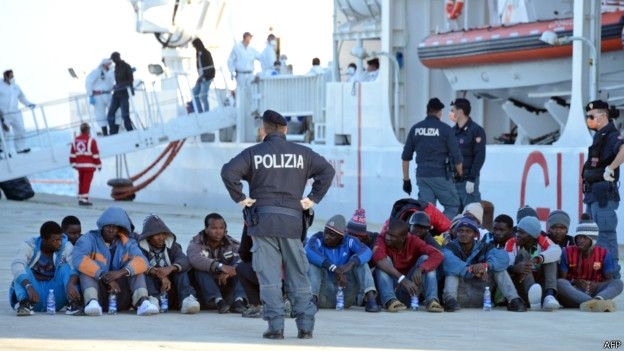 YEREVAN, APRIL 19, ARMENPRESS: Italian police say they have arrested 15 Muslim migrants after they allegedly threw 12 Christians overboard following a row on a boat heading to Italy, Armenpress reports, citing BBC.
The Christian migrants, said to be from Ghana and Nigeria, are all feared dead.
In a separate incident, more than 40 people drowned after another migrant boat sank between Libya and Italy.
Almost 10,000 migrants trying to cross the Mediterranean have been rescued in recent days. Italy has called for more help from the EU to handle the crisis.
More than 500 people from Africa and the Middle East have died making the perilous crossing since the start of the year. Earlier this week, 400 people were believed to have drowned when their boat capsized.
The 15 Muslim migrants involved in the row with Christians were arrested in the Sicilian city of Palermo and charged with "multiple aggravated murder motivated by religious hate".
The suspects, who are from the Ivory Coast, Senegal, Mali and Guinea, were among 105 migrants travelling in an inflatable boat that left Libya on Tuesday.
Eyewitnesses told police how the altercation resulted in Christians being thrown overboard, and that some of the survivors had formed human chains to avoid a similar fate.
Also on Thursday, the Italian navy plucked four survivors - a Ghanaian, two Nigerians, and a man from Niger - from the sea. They said their inflatable boat had sunk after leaving Libya with 45 people on board.
The International Organization for Migrants (IOM) says the missing 41 people have drowned.
The four survivors were taken to Sicily along with 600 other migrants trying to make the crossing in various vessels.
Earlier on Thursday Italian Foreign Minister Paolo Gentiloni said Italy had "not had an adequate response from the EU" about the migrant crisis.
But European Commission spokeswoman Natasha Bertaud said the organisation had no "silver bullet" for the problem.
Last year a record 170,000 people fleeing poverty and conflict in Africa and the Middle East made the perilous crossing to Italy.
With improving weather conditions, the number of people making the crossing of at least 500km (300 miles) has surged. But vessels provided by people smugglers are often underpowered and overcrowded.
€2.8m (£2m) a month goes on Operation Triton, the border control policy that operates off the Italian coast. Monitoring the Mediterranean may not be enough, says commission spokesperson Natasha Bertaud. "We have neither the money nor the political support to launch a European border guard system," she told reporters.
Triton has proved an inadequate replacement for the Italian military search-and-rescue operation Mare Nostrum, which cost three times as much. That 2013 mission was activated after a similar tragedy, when 300 migrants drowned.
The Italian government has requested more financial help from the EU, but the question is: how much money are the 28 member states willing to invest?
Only 22 of the members are supporting the current system. Others, including the UK, opted out, describing the policy as unintentionally encouraging more migrant attempts to make the crossing.