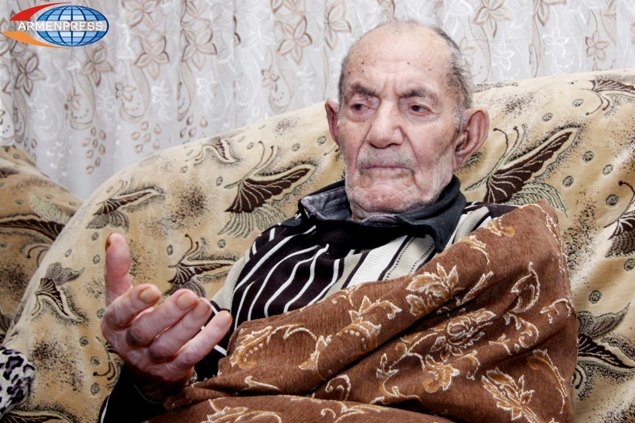 
JANFIDA, 15 APRIL, ARMENPRESS. The search of the Armenian Genocide survivors took our creative team to Armenia’s Armavir province. The village is located along Araks River, by neighborhood of Turkey. Due to the massacres, many Armenians have emigrated from Western Armenia and resettled in Janfida. The oldest resident of the village is 103-year-old Knyaz Shirinyan. He was born in Zrchi village of Alashkert.

"We came here during migration in 1915. At first we have lived in Yevjilar, later in Talin village of Talin region and at the end we came here", the eyewitness of historical events says. As he tells, during migration, he was a baby, whom they have put in the saddle of bull. The birthplace was an abundant animal husbandry and agricultural country, as Knyaz Shirinyan notes.

Migrating to the Eastern Armenia with parents, sisters and brothers, cousins and other relatives, he remembers a bay of his birthplace that had treated them well, even he adored the Armenian people, urging the Muslims not to offend the Armenian girls.

Asked “Would You like to see Alashkert again?”, the old man gave his firm answer: "Alashkert was an abundant land, we have kept cattle and sheep, the life was good. There was eating and drinking. Our country was there, our land and water was there," the eyewitness-survivor underscores.

Looking back, he notes that he is pleased with his life, as till today he is healthy.

The hero of our history married Varduhi, who was born in Janfida (he cannot remember the exact date of the marriage), he had six children, two sons and four daughters. Now he lives with his son, daughter, grandchildren and their children. Until last year, he has been actively engaged in the village’s activities.

One of the important events in the life of the village is newly built church, which was opened in 2014 and was consecrated and named by the name of St. Karabed. The church was built by the sponsorship of Arthur Karapetyan, who is from Janfida and lives in Russia. The villagers in a talk with us told that it was necessary to have a spiritual structure. They were compelled to go to the churches of the nearby villages or the Mother See of Holy Etchmiadzin to hold various Christian ceremonies.