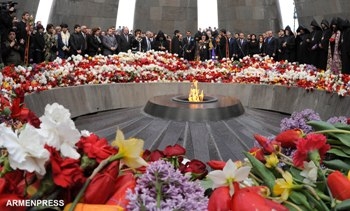 
YEREVAN, 10 APRIL, ARMENPRESS. The Parliament of São Paulo, which is Brazil’s largest state, has passed a resolution recognizing the 24th of April as “the Day of Recognition of the Armenian Genocide and Remembrance of the Victims”. As the Department of Press, Information and Public Relations of the Ministry of Foreign Affairs of the Republic of Armenia reports to “Armenpress”, the Parliament of São Paulo passed Resolution 1266/2014 on 8 April. The author of the draft law was Deputy Petro Tobias.

19:52, 06.24.2022
2418 views The Chinese Ambassador to Armenia attaches importance to cooperation with Shirak Province in various fields