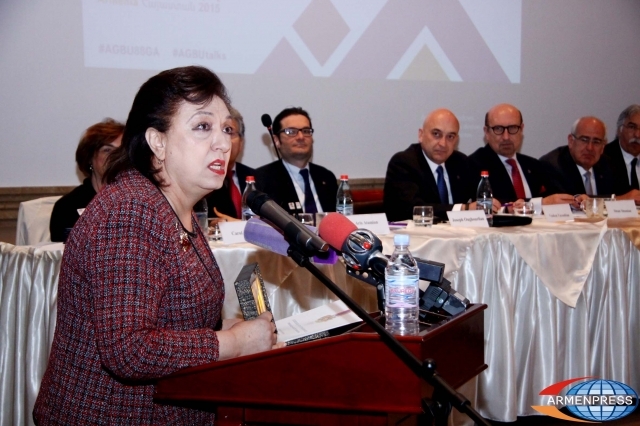 
YEREVAN, 4 APRIL, ARMENPRESS. Minister of Diaspora of the Republic of Armenia Hranush Hakobyan calls on all Armenians around the world to invest in Armenian banks. This is what the minister announced during the 88thAGBU General Assembly held in Yerevan.

“It would be nice if you opened your bank accounts in Armenian banks. You wouldn’t have to do anything, but by having funds in Armenian banks, you would gain benefits and strengthen the Armenian economy at the same time. If we start such a large movement, we’ll contribute to Armenia’s reinforcement,” Hranush Hakobyan emphasized.

The minister also called on Diaspora Armenians to spend their vacation in Armenia at least once every four years to foster the development of tourism in Armenia, continue to lobby for the Armenian Cause and the Nagorno-Karabakh conflict settlement, as well as continue to educate the young people of the Armenian Diaspora so that they feel the desire to learn Armenian.

According to the minister, the key objectives of Armenia and the Diaspora are to strengthen and reinforce the homeland, unite around the Armenian Apostolic Church and support the Syrian-Armenians in dire conditions.