The "miracle worker" in cinema..."Days of Henri Verneuil" kick off in Yerevan | ARMENPRESS Armenian News Agency

The "miracle worker" in cinema..."Days of Henri Verneuil" kick off in Yerevan 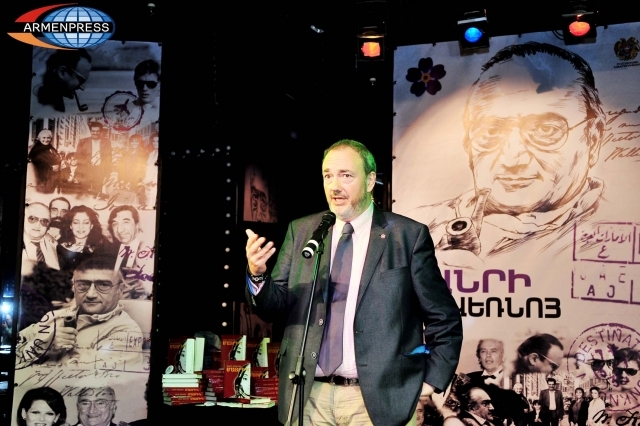 
YEREVAN, 2 APRIL, ARMENPRESS. For the next couple of days, those who appreciate the talent and art of world famous film director Henri Verneuil will have the chance to participate in the events dedicated to the renowned intellectual. The series of events with the title “Days of Henri Verneuil in Yerevan” kicked off at Yerevan State Chamber Theater on 2 April and will last until 5 April. A book presentation, opening ceremonies of a street and movie theater named after Henri Verneuil, film screenings-these are the events that will be held as a tribute to the renowned artist.

The re-released version of Verneuil’s book “Mother” was presented during an event held with the participation of Minister of Culture of the Republic of Armenia Hasmik Poghosyan, the artist’s son, Patrick Malakian and several art lovers on 2 April.

Merited Art Figure of the Republic of Armenia Aneta Yerznkyandescribed Verneuil as a “miracle worker” in cinema. “Henri Verneuil produced 42 films, starred in and produced many films. the book “Mother” has been re-released and is dedicated to the Centennial of the Armenian Genocide,” Aneta Yerznkyan mentioned, as “Armenpress” reports.

The book was translated from French by Sofik Avagyan. The Armenian version of the book was released in 1988 in the United States and re-released in 2015 in Yerevan.

Patrick Malakian informed that Verneuil’s daughter would soon be arriving in Armenia and attached importance to the events dedicated to Henri Verneuil.“My father is not only a part of me, but also, a part of you. I’m very angry that he didn’t teach me Armenian,” Malakian added, expressing gratitude to the Ministry of Culture of the Republic of Armenia for holding the events.

The street adjacent to Yerevan State Institute of Theater and Cinema will be solemnly named after Henri Verneuil and will be followed by the unveiling of a plaque in memory of the French-Armenian filmmaker on 4 April. On the same day, the Henri Verneuil Movie Theater will open on the second floor of Yerevan State Institute of Theater and Cinema. The opening ceremony will be followed by an event of homage to Verneuil with a presentation of episodes of the artist’s life. Verneuil’s films will be shown at Hamazkayin Theater on 5 April.