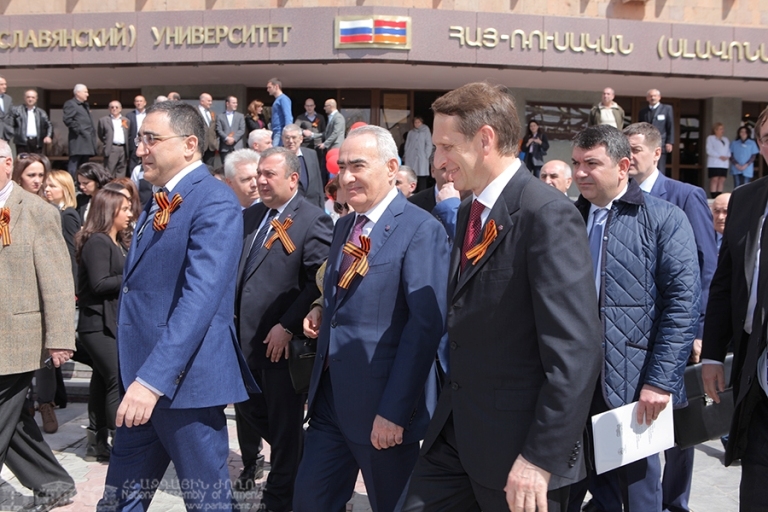 
YEREVAN, 30 MARCH, ARMENPRESS. Chairman of the State Duma of the Federal Assembly of the Russian Federation Sergey Naryshkin is on a working visit to the Republic of Armenia on 30-31 March. During the visit, he was hosted at the Armenian-Russian (Slavonic) University. As the Department of Public Relations and Mass Media of the National Assembly of the Republic of Armenia reports to “Armenpress”, on March 30, Speaker of the National Assembly Galust Sahakyan participated in the forum devoted to the 70thanniversary of the victory in the Great Patriotic War at the Armenian-Russian (Slavonic) University. Among those attending the forum were Deputy Speaker of the National Assembly Hermine Naghdalyan, veterans, as well as students and professors of the University.

Prior to the opening of the forum, Speaker of the National Assembly of the Republic of Armenia Galust Sahakyan and Chairman of the State Duma of the Federal Assembly of the Russian Federation Sergey Naryshkin participated in a tree-planting ceremony held as a sign of friendship between the two nations in the newly opened Alley of Victory, which is located in the yard of the Armenian-Russian (Slavonic) University.