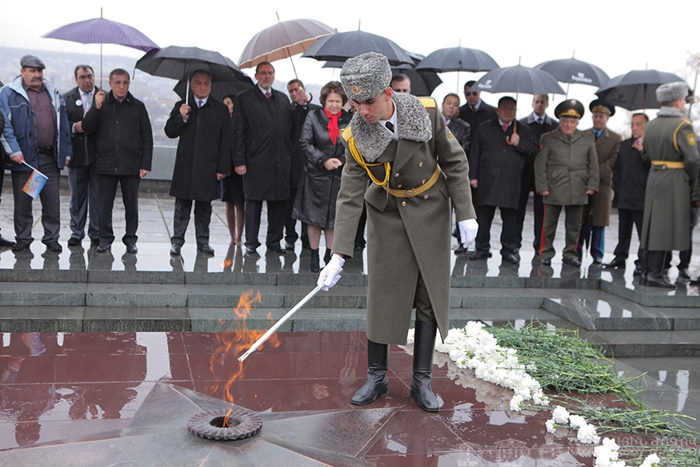 
YEREVAN, 24 MARCH, ARMENPRESS. The members of CIS inter-Parliamentary Assembly accompanied by the Vice President of National Assembly of the Republic of Armenia Hermine Naghdalyan participated in the event titled "Memory Baton". As “Armenpress” reports, the event, which took place in front of the memorial "Mother Armenia", was attended by the parliamentarians of Belarus, Kazakhstan, Kyrgyzstan, Russia, MPs of the National Assembly of the Republic of Armenia, Deputy Mayor of Yerevan, the Russian Ambassador to Armenia, the veterans of the Great Patriotic War and Artsakh Liberation War, Armenian army generals and officers. The participants laid wreath in front of the eternal fire dedicated to the memory of the Great Patriotic War’s victims, then taking of memory fire ceremony was launched.

The Vice President of the National Assembly greeting the guests, firstly attached importance to that contribution, which the Armenian forces have made in the fight against the fascist ideology. "We participate in the event titled "Memory Baton", which is initiated by the CIS Inter-Parliamentary Assembly and which is aimed at taking a piece of unquenchable fire from our countries' capitals and to burn united memory fire in front of Tauride Palace of St. Petersburg on April 16”,  Hermine Naghdalyan stated.