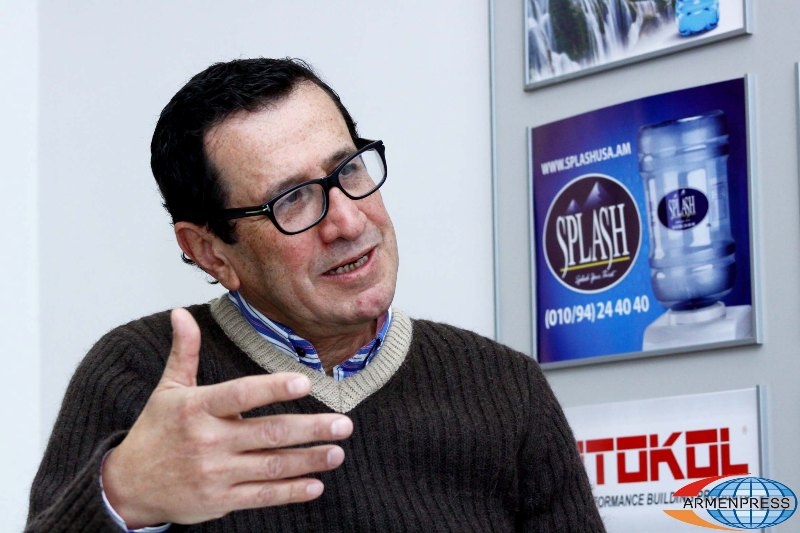 
YEREVAN, 20 MARCH, ARMENPRESS. “The Armenian Genocide is the greatest human tragedy. We cannot say that it is the Armenian’s issue, no, it's an international problem, because the impunity of the international community became a reason for the repetition of such crimes in the future”. These are the words of an Arab journalist Talal Khrayis, who is currently in Armenia. Reporting for a number of authoritative agencies, such as the French France 2 and Arab Assafir, he has specialized in the field of the military journalism. In recent years Khrayis has been carrying out active works especially in the regions of Syria and Lebanon, witnessing the ongoing operations. Armenpress had a talk with Khrayis, revealing the initial causes of his warmth behavior towards Armenian people.

- We lived in Lebanon. My family was great, my parents had 8 children, we needed money and I had to leave school at the age 13 to find work. I found a job in the "Zartonk" college, headed by Nazareth Nazaryan, who is the author of the Atlas of the Armenian genocide. And I was helping him during the preparation work of the Atlas book which consists of over 1600 pages. Those images have remained in my memory. These people loved me very much. They changed my life, suggested to go Vahan Tekeyan’s secondary School to study music and I agreed with pleasure. My life began to change to better. One day, Nazareth said that I call my dad, because he wanted to speak with him. I did not know what he would say. When I told my father, he thought, that I have done something wrong. But when he came to Nazareth, the latter said. "Your son likes the work which he is doing with us. He does it with a great pleasure, but he needs to go to school. He will work with us in the morning, the afternoon will go to school, and we'll take care of all the expenses". At that time there was Hovakimyan- Manukyan Charitable Association in Lebanon, they paid my tuition costs, helped me for the issue of my education, because I had already lost a few years. Later, I moved to Bulgaria, where I was studying medicine, and these costs were covered by the Armenians. My relations with the Armenians and the Armenian issue start from here. I kept this in my memory. The Armenian community helped me a lot to become human being and educated.

- At this point Turkey is losing, as it loses ISIS. These terrible scenes, which are shown by the media, are not real. Islamists lose in Syria, Iraq and Lebanon border. Turkey is no longer strong, and Europe has no confidence towards it. The Turkish government has a lot of problems. If you ask if the Armenian Genocide will be recognized, I say yes. I travel to Europe and I see that 2-3 years ago, no one was talking about genocide, and now many journalists are coming to Armenia.  The governments are not strong in Europe, there is a strong media. All the Media work in favor of the Armenian people. The Armenian community also has become strong, because it sees that it has a young state Armenia, for which it has to make certain steps. Turkey fails and Armenia rises. Armenia is a peaceful country. Despite it has lived a big tragedy, it continues to struggle peacefully and politely, asking the world not to repeat the Genocide. (FULL VERSION IS AVAILABLE IN ARMENIAN)