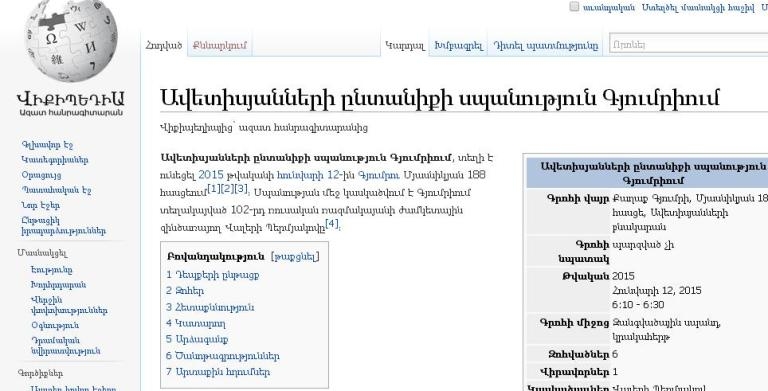 
YEREVAN, JANUARY 15, ARMENPRESS. An article in English and Armenian languages has been posted on Wikipedia, online encyclopedia, dedicated to the brutal assassination of the family of 6 in the second largest city of Armenia Gyumri on January 12. The article states that on January 12, 2015 six people were found dead in Gyumri, Armenia. The Armenian Investigative Committee named Valery Permyakov, a Russian servicemen stationed at the Russian 102nd Military Base in Gyumri, as a suspect. Permyakov reportedly deserted the base. He left a gun and his military uniform at the scene of the crime.

The six victims were identified on the same day. They include a couple, their son and daughter-in-law, a 2-year-old granddaughter, and an unmarried daughter. A six-month old infant survived the attack and was taken to a local hospital in critical condition.

Police began a manhunt and called on citizens to inform about the possible whereabouts of the suspect. Permyakov was detained some 16 km away from Gyumri, near the village of Bayandur, near the Turkish border by Russian border guards. He confessed in the crime. He claimed he entered the family's home because he wanted something to drink. The office of Armenia's Prosecutor-General stated that the case was under the jurisdiction of Russian authorities. Permyakov was initially held at the base. The legality of this action was widely questioned and caused controversy in Armenia.

On January 13, protest took place at the Russian embassy in Yerevan. Protesters demanded the removal of the Russian military base from the territory of Armenia and the expulsion of the Russian ambassador. Residents of Gyumri also held a spontaneous rally in the city’s central square, calling attention to the massacre. On January 13 a rally was held in Gyumri by hundreds of citizens demanding the case be handled by Armenian law-enforcement agencies.

On January 14 a car rally was held in Gyumri demanding the transfer of Permyakov to the Armenian law enforcement agencies. Around two thousand people marched to the territory of Russian military base with the same demand, but the police blocked a road leading to the facility.