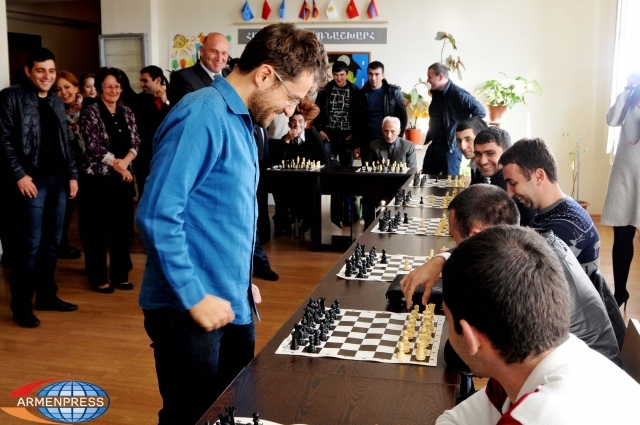 YEREVAN, OCTOBER 29, ARMENPRESS: The leader of the Armenian national chess team Levon Aronian considers very important to be loved by the people. Armenpress reports that the Armenian grand master told about it at the meeting with the students of the Academy of Public Administration of Armenia.
“For me it is very important that people love me. It always gives me power, as I understand that the Armenians all over the world want that I play good chess. Maybe it depends on the fact that I consider myself to be a person, who has come out of people. I always think about it during the games”, - said Levon Aronian.
Levon Aronian is an Armenian chess Grandmaster. On the May 2012 FIDE list, he was ranked number two in the world and had an Elo rating of 2825, making him the third highest rated player in history. Levon Aronian occupies the 5th position in the new ranking list. The Armenian GM currently has 2793 points. The reigning world champion Magnus Carlsen tops the ranking list. Fabiano Caruana representing Italy climbed to the 2nd position. Veselin Topalov is the third, while Alexander Grischuk appeared on the fourth spot.
Aronian won the Chess World Cup 2005. He led the Armenian national team to the Gold medals in the 2006 (Turin), 2008 (Dresden) and 2012 (Istanbul) Chess Olympics and at the World Team Chess Championship in Ningbo 2011. He won the FIDE Grand Prix 2008–2010, qualifying him for the Candidates tournament for the World Chess Championship 2012, where he was knocked out in the first round. He was also World Chess960 Champion in 2006 and 2007, World Rapid Chess Champion in 2009, and World Blitz Chess Champion in 2010.
Levon Aronian was declared the best sportsman of Armenia in 2005 and was awarded the title of "Honored Master of Sport of the Republic of Armenia" in 2009.

16:31, 06.30.2022
2016 views Statements of Turkish officials that they coordinate the process with Azerbaijan are strange – Armenia’s Special Envoy