Iran to use Armenia as transit route to EEU countries 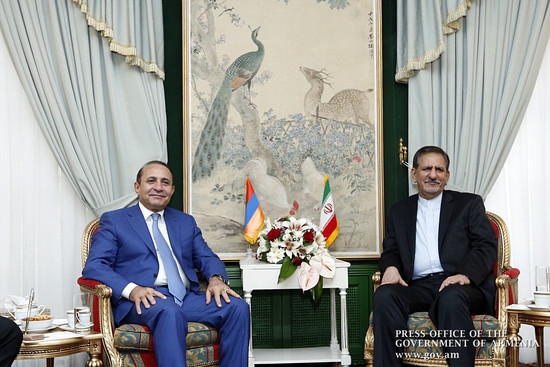 YEREVAN, OCTOBER 20, ARMENPRESS: By the invitation of the First Vice President of the Islamic Republic of Iran Eshaq Jahangiri Kouhshahi, the Prime Minister of the Republic of Armenia Hovik Abrahamyan has left for Iran. Iran has planned to build a hydropower plant in Armenia in a bid to execute previous bilateral agreements, First Vice President Eshaq Jahangiri said on Monday.
Armenpress reports, citing IRNA that he made the announcement in a joint press conference with the visiting Armenian Prime Minister Hovik Abrahamyan. The two neighboring countries aim to establish a joint commission to facilitate promotion of bilateral ties, Jahangiri added. He referred to the current 300 million dollars volume of trade exchange between Tehran and Yerevan and called for it increase. Iran is keen to use Armenia's soil as a transit route for export of goods to Russia, the official said.
Armenian prime minister arrived in Tehran on Monday morning to discuss latest regional and international developments with Iran's high ranking officials. Bilateral topics, especially energy issues are slated to be discussed during the two-day visit of the Armenian premier.

Iran and Armenia have taken major strides towards widening and deepening of their relations in recent years, particularly in the economic sector.