Preacher refusing to give up keys to Yangon church 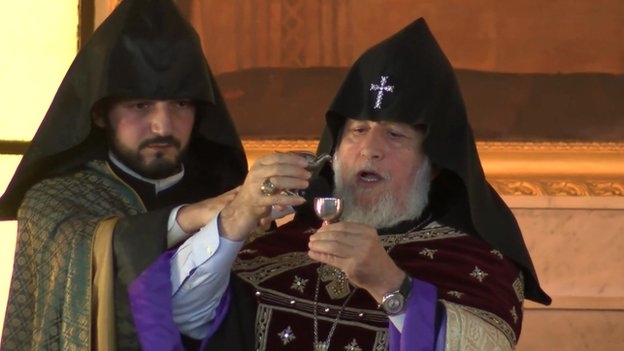 YEREVAN, OCTOBER 7, ARMENPRESS: A recent Magazine article reported on the dwindling number of Armenians in Myanmar, also known as Burma. As Jonah Fisher reports from Yangon, the head of the Armenian Church has been to meet the local congregation and has made some changes.
Armenpress reports, citing BBC that to mark the visit of the head of the Armenian Church the garden was tidied, the fence re-painted, and one of Yangon's new heritage plaques erected outside.
It proudly states that at the age of 152, St John the Baptist's is "Yangon's oldest surviving church".
For most of those years Yerevan has had very little to do with this small remote outpost.
Now that's changing and Catholicos Karekin II came to Yangon to try to resolve a dispute over the management of the church and its property.
When the last full Armenian (both parents) in Myanmar died six years ago, effective control had passed into the hands of a man who had no connection with either Armenia or the Orthodox tradition.
"Father" John Felix, as the sign in the street outside calls him, had taken over the running of the church. A Burmese man of Indian extraction, he claimed to be an ordained Anglican priest which would, with the Armenians' permission, give him the right to perform religious services.
Felix comes across as a very pleasant, humble man, but unfortunately the Anglican church says he has never been a priest.
"He's not recognized by our Church any more, once he was a deacon," the Archbishop of Myanmar Stephen Than Myint Oo told me.
The archbishop makes a veiled reference to inappropriate behavior and says "Felix does not have the authority to perform religious services."
Felix says the allegations are just "rumors", that he has the correct documentation and that efforts are being made to undermine him.
Shortly after we met, he was called to a meeting with the Catholicos Karekin II, told that he could no longer work in the church and asked to return the keys.
Felix refused, and according to the Armenian Church is now effectively a squatter on the historic site. A legal battle looks likely.
Nevertheless, the church doors opened on Saturday for the biggest Armenian mass in Myanmar in decades. The altar was re-consecrated and it was announced that an Armenian priest based in Calcutta would be flying in every weekend to conduct services.
The Armenians are hoping that this rather painful trip will prove to be a badly needed turning point for the community.
In the early 17th Century, large numbers of Armenians fled the Ottoman Empire and settled in Isfahan in what's now Iran. From there, many travelled on in later years to form a commercial network which stretched from Amsterdam to Manila.
Census records from the late 19th Century suggest that about 1,300 Armenians were living principally in Calcutta, Dhaka and Rangoon.