Sos Sargsyan’s monument presents the artist with all his greatness 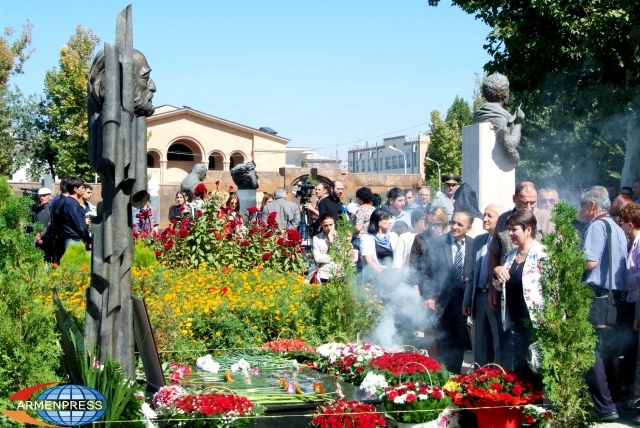 
YEREVAN, SEPTEMBER 27, ARMENPRESS: It is already a year that USSR People's artist, renowned actor Sos Sargsyan is not with us. September 26 marks the anniversary of the death of the great intellectual. On that occasion intellectuals, state officials and lovers of his art visited on September 27 the Yerevan Komitas Pantheon to pay tribute to the artist’s memory and to see the monument dedicated to him. The sculptor of the monument is Mkrtich Mazmanyan.

“If we search, we can find brilliant examples for educating our nation and young people,” Defense Minister of Armenia Seyran Ohanyan told journalists speaking of Sos Sargsyan, Armenpress reports. Recalling the artist, Sos Sargsyan’s widow – Nelly Sargsyan, noted that there was no higher value for the actor than the homeland.

Sos Sargsyan was a prominent Armenian actor, director and writer. He was born in Stepanavan in northern Armenia, at the time part of the Soviet Union. He moved to Yerevan in 1948 and started to perform at the Theater of the Young Spectator. He graduated from the Fine Arts and Theater Institute in 1954 as an actor. Between 1954 and 1991 he performed at the Sundukyan State Academic Theatre of Yerevan. Some of his most notable roles include Don Quixote, Iago, King John, King Lear, etc. He starred in over 40 films, mostly Armenian. Besides Armenian films he has starred in a number of Russian films, most notable of which is Solaris (1972), directed byAndrei Tarkovsky.

In October 1991, a month after Armenia's independence from the Soviet Union, Sargsyan took part in the first presidential election in independent Armenia. He was nominated by the Armenian Revolutionary Federation. In 1991 he established the Hamazgayin (Pan-National) Theater, which he headed until his death. From 1997 to 2006 he was the rector of the Yerevan Cinema and Theatre Institute. Sargsyan died on September 26, 2013 in Yerevan. Sargsyan's funeral was held on September 29 in attendance of Armenia's President Serzh Sargsyan and thousands of people. He was buried at the Komitas Pantheon.