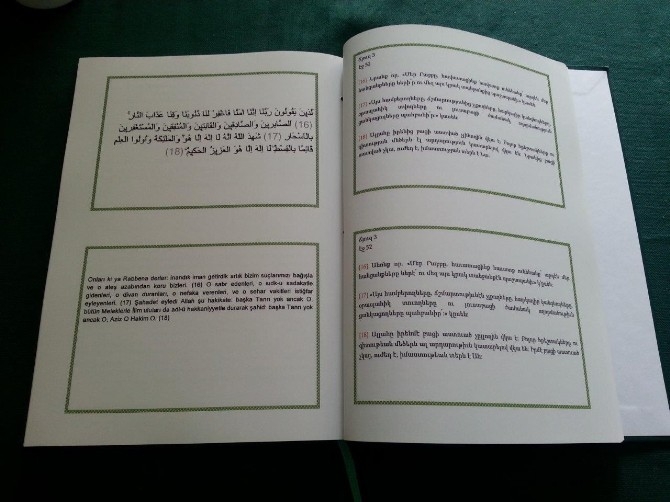 YEREVAN, SEPTEMBER 27, ARMENPRESS: The publishing house BMAR in Ankara published the Eastern and Western Armenian translation of Quran. Armenpress reports that Agos periodical informed about it. Yavuz Aydyn, a post-graduate of the Armenian language and culture section of the Philology, History and Geography Faculty of Ankara University, has concluded a translation into Armenian of the Quran written in Turkish. Bagrat Estukyan, a coordinator of the Agos newspaper in Istanbul, is the editor of the translation.
The representative of the publishing house said that the initiative aims at the spread of the idea among the Armenians that Islam is not an enemy religion. “Due to this translation, you will have the opportunity to get acquainted with our religion”, - he said.
Quran is the Holy Book of the Muslims. According to the tradition, it was handed over by Angel Jibril (Gabriel) to the Preacher Mohammed. The translation consists of 10 volumes, 2500 pages in total. The first translation of the Quran from Arabic into Armenian was made by Stepan Lehaci in the 17th century, then by Abraham Amirkhanyants in 1909 and republished in 1910. The third translation from Persian belongs to Edward Hakhverdyan, published in 2006.