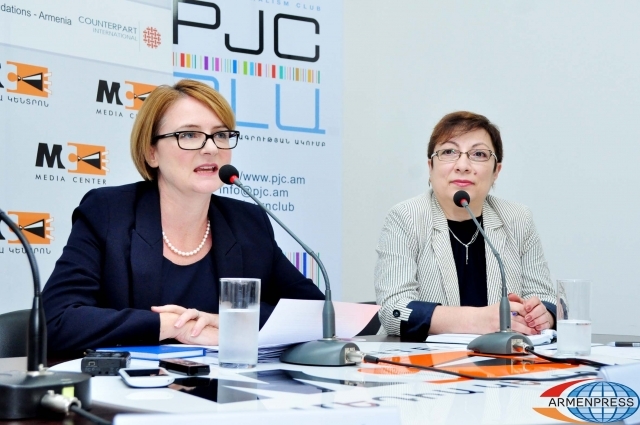 YEREVAN, SEPTEMBER 23, ARMENPRESS: The Ambassador Extraordinary and Plenipotentiary of Great Britain to the Republic of Armenia Katherine Leach regrets about the explosion of the Armenian St. Nahatakats/Martyrs Church in Deir ez-Zor days ago. She considers this act to be a great tragedy, adding that the number of such incidents in Syria is increasing day by day.
“Certainly what has happened in Deir ez-Zor is a tragedy. I am concerned over the fact that in Syria the religious mosaic is endangered. We imagine how endangered is the security of the people living there. That is the reason, the international community tries to find a possible strategy to come out of this situation”, - Katherine Leach said at the press conference at Media Center, Armenpress reports.
Earlier it was reported that the Foreign Minister of Armenia Edward Nalbandian has issued a statement related to explosion of the Armenian St. Nahatakats/Martyrs Church in Deir ez-Zor: “We strongly condemn explosion of the Armenian St. Nahatakatz/Martyrs Church in Deir ez-Zor, commemorating the Armenian genocide martyrs, by the terrorists. This terrific vandalism against the sanctuary one more time shows the brutal nature of the so-called “Islamic State” terrorist group. International community should immediately stop and eliminate that plague threatening the civil humanity, should break the ways of nourishing it, funding, supporting and sponsoring.”
The opening of the memorial and consecration of the St. Martyrs Armenian Church took place in 1991 by Catholicos of the Great House of Cilicia Karekin B, and on 24 April 2002 it was proclaimed as a national place of pilgrimage by Catholics Aram I.