If Turkey is not behind Deir ez-Zor church explosion, it should condemn terrorism: Vigen Sargsyan | ARMENPRESS Armenian News Agency

If Turkey is not behind Deir ez-Zor church explosion, it should condemn terrorism: Vigen Sargsyan 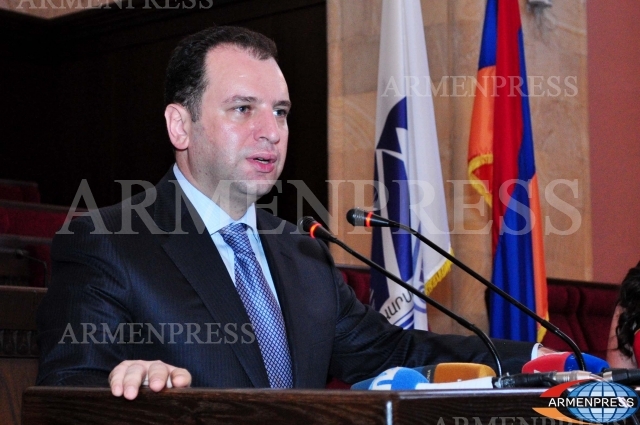 YEREVAN, SEPTEMBER 22, ARMENPRESS: The Armenian Genocide is not fully condemned, recognized and is not punished. It still continues. It is proved by the explosion of the Armenian St. Nahatakats/Martyrs Church in Deir ez-Zor by the Islamic State of Iraq and the Levant on September 21 at 11:30. This was stated by the Head of Staff of the President of the Republic of Armenia Vigen Sargsyan in his Facebook profile.
Armenpress reports that the Head of Staff wrote in particular: “The recognition and condemnation of the genocide is not a historic issue but a political one. If the policy is not supported by the principles, it will always lose to the modern interests. The principles and the morality are above everything. If Turkey is not behind the terrorism, having exploded this unique church, which is of great importance for the Armenians, it will immediately issue a condemning statement”.
Earlier it was reported that the Foreign Minister of Armenia Edward Nalbandian has issued a statement related to explosion of the Armenian St. Nahatakats/Martyrs Church in Deir ez-Zor: “We strongly condemn explosion of the Armenian St. Nahatakatz/Martyrs Church in Deir ez-Zor, commemorating the Armenian genocide martyrs, by the terrorists. This terrific vandalism against the sanctuary one more time shows the brutal nature of the so-called “Islamic State” terrorist group. International community should immediately stop and eliminate that plague threatening the civil humanity, should break the ways of nourishing it, funding, supporting and sponsoring.”
The opening of the memorial and consecration of the St. Martyrs Armenian Church took place in 1991 by Catholicos of the Great House of Cilicia Karekin B, and on 24 April 2002 it was proclaimed as a national place of pilgrimage by Catholics Aram I.