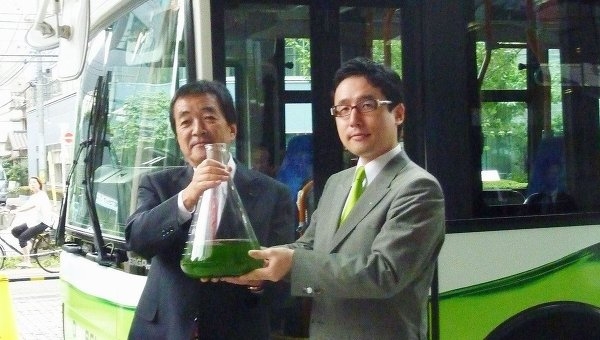 
YEREVAN, JULY 1, ARMENPRESS. In late June the company Isuzu and Euglena signed an agreement on joint development of the engine and fuel from green algae, which is considered a new generation of biofuels. The world’s first bus running on biofuels using green evgenovych algae began to ride in the Japanese city of Fujisawa, informs “Armenpress”, referring to RIA Novosti. Fuel for buses jointly developed by the Japanese manufacturer of trucks and buses Isuzu and company Euglena. “The bus is doing on 22 trips a day. We hope that in four years we will be able to create technology that allows the use of biofuels on 100% produced from green algae. Now its share is only 1%,” – said the representative of the press-service of the company.

According to the plans, by 2018, the company expects to create the technology without additional load on the engine to use a biofuel, which will be 100% produced from green algae. For diesel vehicles todaybiofuels is the most promising among the possible environmental substitutes for gasoline and diesel fuel, as neither hydrogen nor electricity do not solve the main task – the possibility of run on long distances without refueling, reported RIA Novosti.

However, the downside of this biofuel is still a high load on the engine. If the ambitious project will be implemented, the company will be able to offer to the market a new type of biofuel, combining all the benefits of this type.

It should be noted that the company Euglena first in the world to achieve the cultivation of algae Euglena green on an industrial scale. Seaweed contains oil substance, and therefore attracted the attention of scientists as possible raw materials for biofuels, in addition, it contains chlorophyll and absorb carbon dioxide. The launch of the first Charter bus for fuel from green algae was the first step towards the implementation of the project.

21:29, 09.24.2021
Viewed 1822 times Today, no Armenian lives or practically could live in the territories under the control of Azerbaijan – Pashinyan