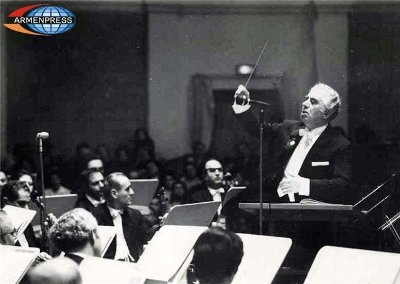 
YEREVAN, JUNE 6, ARMENPRESS. One of the greatest composers of all times, conductor, legend... June 6 is Aram Khachaturian's birthday. One of the greatest names in the art of music has left a great influence on the history of culture. “He became the big denial of our myth of smallness, became the symbol of measuring our small people with the great ones… Became our certificate of civilization…” – Hamo Sahyan said about the renowned composer.

As reports “Armenpress”, last year in Armenia and the whole world the 110th anniversary of the famous composer was celebrated with many festive events. The festivities continued this year. Khachaturian's works were heard around the world.

At the end of 2013, an album comprising Aram Khachaturian's diverse musical heritage was introduced to the public. It was released in the frames of Aram Khachaturian's 110th anniversary celebrations and events on the initiative of the Ministry of Culture of the Republic of Armenia.

Aram Khachaturian was born on June 6, 1903 in Kojori. In 1921, the eighteen-year-old Khachaturian moved to Moscow and enrolled at the Gnessin Musical Institute. In 1929, Khachaturian entered the Moscow Conservatory to study composition under Nikolai Myaskovsky and orchestration under Sergei Vasilenko. Beginning with his earliest works, Khachaturian extensively used Armenian folk music in his compositions. Khachaturian's works span a broad range of musical types, including ballets, symphonies, concertos, and numerous film scores. Khachaturian's works include concertos for violin, cello and piano as well as concerto-rhapsodies for the same instruments.  Most of his works are saturated with centuries-old motifs of Armenian culture. His works paved the way for new styles and daring explorations. His colorful orchestration technique, admired by Shostakovich and others in the past, is still noted for its freshness and vitality by modern composers. Khachaturian's influence can be traced in nearly all trends of Armenian classical traditions, whether in symphonic or chamber music. The philharmonic hall of the Yerevan Opera Theater is officially called the Aram Khachaturian Grand Concert Hall since 1978. The House-Museum of Aram Khachaturian was opened in Yerevan in 1982. Music schools are named after Khachaturian in Tbilisi, Moscow, Yerevan and smaller Armenian cities. Streets in Yerevan, Tbilisi, Moscow, Astana and Simferopol are also named after Khachaturian.

11:56, 01.27.2020
Viewed 2876 times Pilot of helicopter that crashed in US killing basketball legend Kobe Bryant was of Armenian descent