Armenian and foreign doctors’ efforts did not fail: newborns under threat of blindness will see | ARMENPRESS Armenian News Agency

Armenian and foreign doctors’ efforts did not fail: newborns under threat of blindness will see 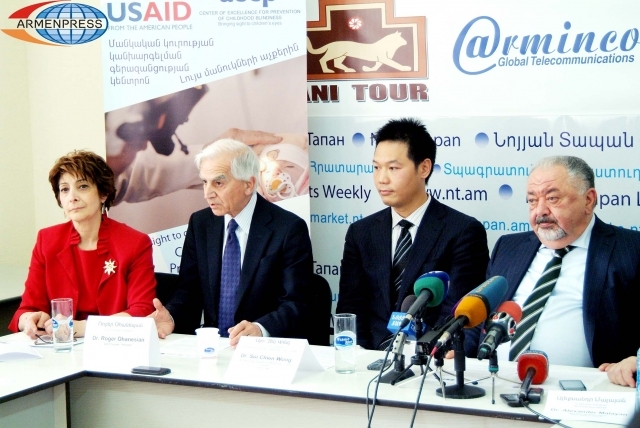 
YEREVAN, APRIL 29, ARMENPRESS. From now on the newborns with the diagnosis of "retinopathy of prematurity" will be operated in Armenia as well, which will give the babies the opportunity to escape the threat of blindness. In the sphere of healthcare this new achievement is based on the program of "Center of Excellence for Prevention of Childhood Blindness" implemented by the Armenian Eyecare Project and the U.S. Agency for International Development, which is fighting against childhood blindness by preventing the disease of “retinopathy of prematurity”. Now the program has reached the phase containing the greatest challenge – the operations, which until now have not been performed not only in Armenia, but also in the region. For this matter the Ministry of Healthcare of Armenia turned to Dr. Sui Chen Wong working in the UK, who readily agreed to visit Armenia and carry out special operations, as well as train the specialists. As reports "Armenpress", at the press conference of April 29 Sui Chen Wong noted that the first successful operation was performed on April 28. It took about four hours.