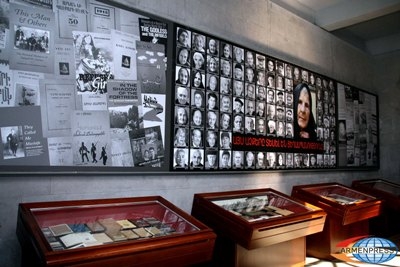 
YEREVAN, APRIL 24, ARMENPRESS. The number of the visitors of the Armenian Genocide Museum-Institute is almost 200 thousand per year, but on April 24 their number reaches 50-100 thousand. In his interview with “Armenpress” Khachatur Kobelyan – researcher of the museum-institute, informed that most of the people who visit Tsitsernakaberd Memorial Complex and lay flowers at the eternal fire, pay a visit to the museum-institute to get familiar with the facts and exhibits as evidence of the Genocide.

"This year the number of the visitors may slightly decrease, because at the moment the museum is being renovated and a preparation work is being done for the new exhibition. But the visitors will have the opportunity to see the temporary exhibition dedicated to the 100th anniversary of World War I, entitled “World War I: Allies, Characters, Massacres” – he said.

11:29, 05.19.2022
3235 views U.S. recognizes role of population of Nagorno-Karabakh in deciding its future–Ambassador Tracy’s interview to ARMENPRESS