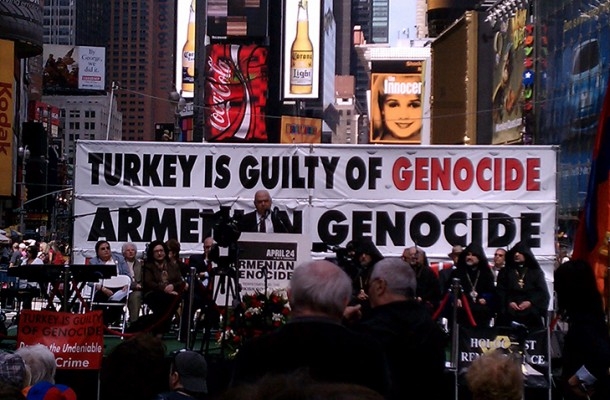 
YEREVAN, FEBRUARY 24, ARMENPRESS. On Sunday, April 27, 2014 from 2-4 pm, thousands of devoted Armenian-Americans and their friends and supporters will gather in Times Square (43rd St. & Broadway) to commemorate the first genocide of the 20th Century, The Armenian Genocide (Medz Yeghern). As reports “Armenpress” citing Massis Post, in recognition of Genocide Awareness Month (April), Holocaust Remembrance Day (Yom HaShoah) will also be commemorated, as well as other genocides that have occurred since then.

The theme of the Armenian Genocide Commemoration is “Turkey is Guilty of Genocide: Denying the Undeniable is a Crime.” This historic event will pay tribute to the 1.5 million Armenians who were annihilated by the Young Turk Government of the Ottoman Empire and to the millions of victims of subsequent genocides worldwide. Speakers will include civic, religious, humanitarian, educational, cultural leaders, as well as performing artists. This event is free and open to the public. Dr. Mary A. Papazian, President of Southern Connecticut State University and Attorney R. Armen McOmber will preside over the ceremonies.

Dennis R. Papazian, PhD, past National Grand Commander of Knights of Vartan and Founding Director of the Armenian Research Center at the University of Michigan-Dearborn discusses the Armenian Genocide. “These killings, which were labeled crimes against humanity and civilization at the time, exactly fit the definition of the word genocide, which was coined by Raphael Lemkin, a Polish-Jewish lawyer in 1943,” comments Papazian. “It is only proper to bring the terminology up to date and apply the international laws for genocide to the Armenian case.”

Papazian headed the Armenian Assembly of America in 1975, when a non-binding resolution recognizing the mass killings as genocide, passed through Congress. On April 22, 1981, then-President Ronald Reagan issued Proclamation #4838 that summoned Americans to commemorate the anniversary of the liberation of the Nazi death camps. The proclamation stated, “Like the genocide of the Armenians before it, and the genocide of the Cambodians which followed it—and like too many other persecutions of too many other peoples—the lessons of the Holocaust must never be forgotten.”

Papazian further discusses that President Barack Obama used the Armenian phrase Medz Yeghern, which is the equivalent of the phrase genocide in the Armenian language, in a statement issued to commemorate Armenian Remembrance Day on April 24, 2013. “But still the U.S. position is still kept ambiguous about using the word genocide because our country fears alienating Turkey, an important country in the Middle East,” he adds.

“In the long run, Turkish recognition of the Armenian Genocide is critical, since Turkey is the responsible successive government of the Ottoman Empire,” stresses Papazian. “In recent years there have been some positive developments among progressive Turkish intellectuals, including the grandson of one of the chief perpetrators; therefore, it is within the realm of possibility that Turkey itself will recognize the Armenian Genocide on the one hundredth anniversary of its beginning,” he concludes.