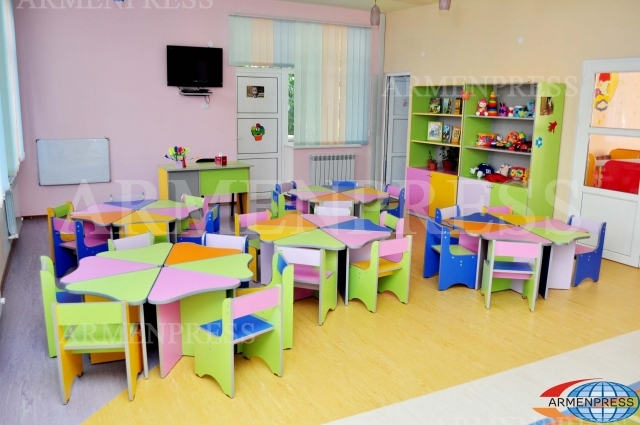 
YEREVAN, FEBRUARY 18, ARMENPRESS. With financial support from its British affiliate, the Hayastan All-Armenian Fund has started building a two-story kindergarten in Sasunik, a village in Armenia’s Aragatsotn Region. The project is co-sponsored by the Sasunik Municipality.

The Press Service of the Fund informed “Armenpress” that currently construction crews are laying the foundations of the future kindergarten, which will accommodate up to 90 children.

As he went on to discuss some of the infrastructure and other issues facing his village, Margaryan said that among the community’s most urgent needs are the construction of an irrigation network and the renovation of the community’s roads. On the plus side, the mayor added, there have been 23 weddings in Sasunik since the beginning of 2014, pointing to the fact that many are opting to stay put and continue to live here.

Incorporated within Sasunik is the village of Karin, which is populated by refugees from Baku. There are about 4,000 residents in Sasunik. The main local occupations are viticulture and animal breeding, with more than 100 residents employed at Sasunik’s Armenia Wine factory.

In recent years, the financial support of the Armenian community of Britain has made possible the renovation of the Delivery and Surgery departments of the Maternity Ward at Yerevan’s Surb Astvatsamayr Medical Center (2009), the Pediatric Department of Kapan Medical Center (2011), and Yerevan’s Shengavit District Boarding Kindergarten (2012). Also through British-Armenian support, more than 20 schools in Armenia’s border villages have been provided with furniture and school supplies.

11:56, 01.27.2020
Viewed 3695 times Pilot of helicopter that crashed in US killing basketball legend Kobe Bryant was of Armenian descent