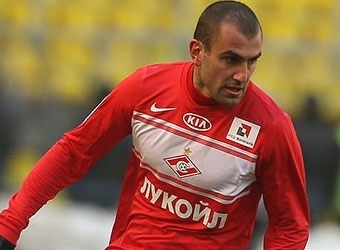 As reports “Armenpress” citing Championat website, Yura Movsisyan’s agent stated: “There have been several proposals regarding Movsisyan’s transfer, notwithstanding none of them has been accepted by the club. Yura is a significant player for Spartak and the administration is not determined to sell him.”

Previously it was reported that German Wolfsburg is willing to pay EUR 7,5 million for the transfer of the forward of the Armenian National Football Team and Spartak Moscow Yura Movsisyan.

German Newswalk website stated this saying that the Armenian footballer can move to Wolfsburg. Among other things it was stated that Movsisyan’s transfer can total to EUR 7,5 million. “Currently the striker shows a very good performance in the Russian Premier League,” Newswalk noted.

Yura Movsisyan was born 2 August 1987 in Baku, Azerbaijani SSR to an Armenian family of parents Sergey Movsisyan and Aida Sahakyan and brothers Movses and Hovhannes. Yura has no memories of his home. All he recalls is his family left in "late 1991 or early 1992" because of what Yura remembers as "Killing ... everything." His family moved to the United States and settled in the Los Angeles area, where there is a large Armenian community. Movsisyan attended and played soccer at Pasadena High School, and played a year of college soccer at Pasadena City College before being discovered by MLS scouts prior to the 2006 MLS SuperDraft. His idol is Thierry Henry.

On 9 August 2010, he joined the Armenia national team and made his debut in a friendly against Iran on 11 August 2010. He was one of the most prolific strikers in the UEFA Euro 2012 qualifying campaign, netting in 4 goals and assisting in 5 others.

He was sold for €2.5 million to FC Krasnodar in Winter 2011. Movsisyan made his debut in an opening game of the season on 12 March 2011 in a 0-0 draw against Anzhi Makhachkala and scored his first goal in a 2-0 win over with the help of YoungSleepySpartak Nalchik in the next game. After fighting injury early in the season, Movsisyan has become a major producer on the team and has netted 14 goals, including a brace against Volga (that win would keep the club safe from relegation) and a goal, own goal and an assist in a 2-2 draw against Amkar Perm. At the end of the season, Movsisyan was selected as the Most Valuable Player of the Year for 2011 by the club. Even after the 2011/12 season, Movsisyan was named the top 10 best new foreign player and was the top scorer in the Relegation group. In the opening game of the season, Movsisyan scored a brace in a 2-1 win over Rubin Kazan and scored another and provide an assist for Joãozinho in a 3-1 win over Lokomotiv Moscow. He would score twice brace in a 2-2 draw against Amkar Perm and another goal and an assist for Dušan Anđelković in a 6-1 win over against Mordovia Saransk. His goalscoring form made him linked with various club. But this didn't stop Krasnodar as the club offered him a new three year contract However, the club couldn't match his salary after Movsisyan wanted a higher salary, according to Manager Slavoljub Muslin. Movsisyan stated Krasnodar will always be dear to him and expressed gratitude to Krasnodar FC president Sergey Galitsky for ensuring perfect conditions for professional growth.

Movsisyan completed a move to Spartak Moscow on 8 December 2012 for a reported €7.5 million and signed a contract for 4.5 years with a salary of €1.5 million a year. He is the 7th most expensive transfer in Spartak history. On 10 March 2013, Movsisyan made his debut for the new club in a home game against Terek Grozny. Movsisyan had an immediate impact by scoring a hat-trick, leading to Spartak victory 3-1. This was the first hat-trick Movsisyan scored in his career and he became the first Spartak player to score a hat-trick in his debut. His next goal came in a 2:0 home victory over Amkar Perm. Movsisiyan then received an injury in a 2:2 derby against CSKA moscow and missed the next 3 games. At the end of the season his team finished 4th which means they have qualified for the play-off round of the UEFA Europa League. Next season started perfectly for Yura, he scored a goal in the first match of the season from a penalty, in a 2:1 victory over Kryliya Sovetov.

Spartak legends Nikita Simonyan and Alexander Mirzoyan have personally sent well wishes to Movsisyan in connection with his becoming a Spartak player. Mirzoyan personally wished Movsisyan success and gave Movsisyan an autographed photo of him. Simonyan wrote to Movsisyan, “Dear Yura, I hope that you win more titles at Spartak than I. I wish you success!” Movsisyan replied: “It will be difficult to exceed Simonyan’s achievements—[both] as a player and a coach. Thanks very much for such valuable gift. I know of Simonyan and Mirzoyan as the greatest players, and I am proud to be an Armenian just like them. I have not seen them play, but I know that they have done a lot for Spartak. I am not even close to them [in terms of accomplishments]. [But] I certainly do have plans. I want to score goals and achieve wins. [And] when something goes successfully, I will enter into history at that time.”