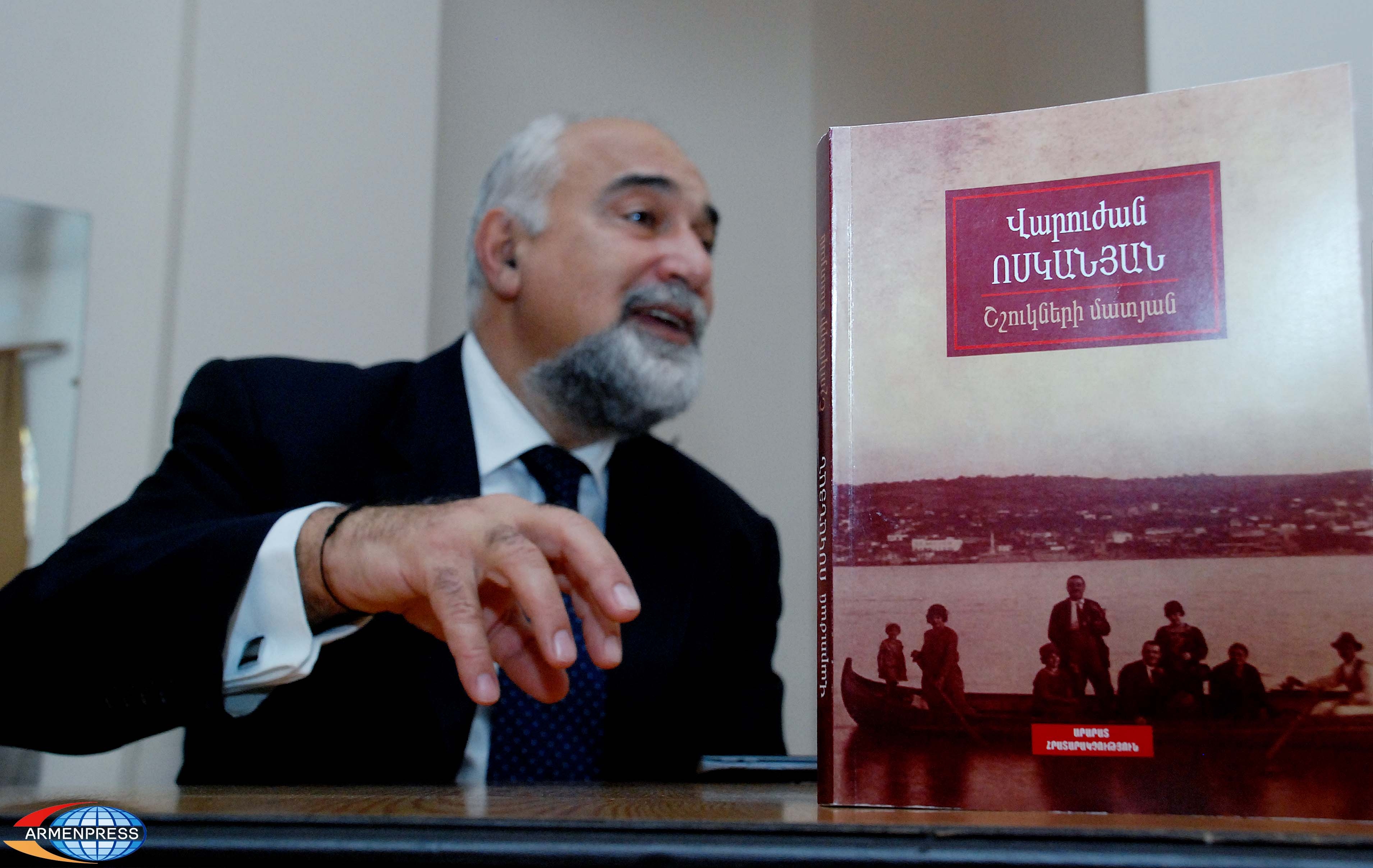 
YEREVAN, DECEMBER 28, ARMENPRESS. Romanian TvR 3 TV Company broadcasted a movie based on "The Book of Whispers" by Varujan Vosganian on December 20. Andrei Magalie authored the screenplay and Focsani Pastia introduced his portrayal of Karapet. Sorin Francu is the director of the theatre. The author of the book himself reads vast parts from his book for the audience. The movie was broadcasted three times on Tvr HD TV company.

Vosganian's "The book of whispers" was published in 2009 in Bucharest and became the winner of the highest scores and won the most awards of the publishing year. Just three months after the publication of the novel, the Spanish Pre-Textos publishing house acquired the right to publish it in Spanish from Romanian Polirom publishing house.

The Spanish version was published in the early 2011, by Joaquín Garrigós' translation, and in August of the same year, it was released in Argentina by the presence of the author and translator.

"The Book of Whispers" begins in a picturesque register, on a lane of the Armenian quarter of Focşani in the 1950s, among the steam of freshly roasted coffee and the scents of grandmother Armenuhi’s larder, among the old books and photographs of grandfather Garabet. But the reader is not left to savour the intimacy of this hearth and home and nor is he invited to chat with the merry folk who in peacetime spin stories about Ara the Fair and Tigran the Great. Varujan Vosganian's "old Armenians from childhood" have no delectable tales to tell, but rather events that are thoroughly disturbing. In narrating these events, they attempt to disburden themselves of a trauma – their own and that of their forbears.

The book caused so many troubles to the Turkish authorities, which spare no effort to prevent its further translations and publications. The Turkish Embassy to Romania sent a note of complaint to the Romanian authorities, when a meeting dedicated to the book and its author was organized in one of the country's museums.

Varujan Vosganian was born in Craiova on 25 July 1958. He spent his childhood and adolescence in Focşani. He is a graduate of the Faculty of Commerce of the Academy of Economic Studies and of the Faculty of Mathematics of Bucharest University. He is a Doctor of Economics, a founder of the Romanian Society for Economics, an International Adviser to the European Union’s Centre for Political Studies, based in Brussels, and a member of the Young Politicians Club (London). He is the Senator for Jassy and between 2006 and 2008 he was Minister of Finance and the Economy. He is President of the Union of Armenians in Romania and Vice President of the Romanian Writers’ Union. Besides various theoretical works, mainly on economic subjects, he has published three volumes of poetry: Şamanul albastru (The Blue Shaman) (1994), Ochiul alb al reginei (The White Eye of the Queen) (2001), and Iisus cu o mie de braţe (Jesus with a Thousand Arms) (2004). His collection of novellas, Statuia comandorului (The Statue of the Commander) (1994) was awarded the Prize of the Bucharest Writers’ Association. Varujan Vosganian has written more than five hundred articles, studies and essays on economics, politics, and literature, which have been translated in English, Spanish, Russian, Ukrainian, and Armenian. The novel The Book of Whispers, published in 2009, was greeted as a revelation by the Romanian critics. It has earned extensive praise and is already regarded as one of the most important books of contemporary Romanian literature.

11:29, 05.19.2022
3136 views U.S. recognizes role of population of Nagorno-Karabakh in deciding its future–Ambassador Tracy’s interview to ARMENPRESS