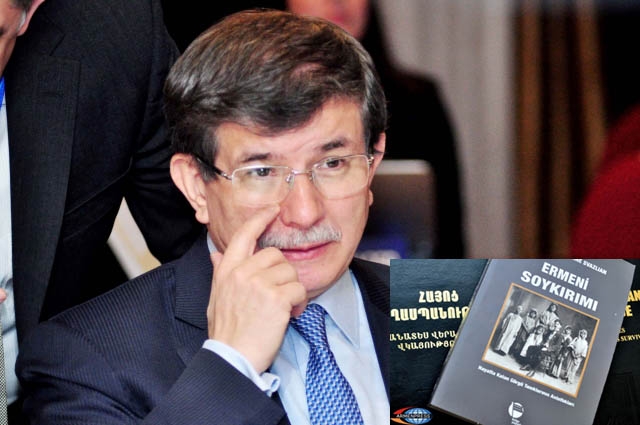 
YEREVAN, DECEMBER 13, ARMENPRESS. The Minister of Foreign Affairs of Turkey Ahmet Davutoglu received a unique gift in Yerevan. The Turkish version of “The Armenian Genocide: Eye-Witness Testimonies of Survivors” book was handed to him. “Armenpress” reports that the author of the book, Lead Researcher at the Institute of Archeology and Ethnography at the Academy of Sciences in Armenia, Verjine Svazlian handed it to the Turkish Minister through one of the members of the Turkish delegation. The suggestion was heard by broadcaster Nver Mnatsakanyan at the course of “Interview” TV program on Public TV Company of Armenia when the author of the book Verjine Svazlian was in the reception-room of the program. She accepted the suggestion and asked to hand the book to the Minister of Foreign Affairs of Turkey Ahmet Davutoglu.

Voluminous “The Armenian Genocide: Eye-Witness Testimonies of Survivors” has been introduced to the international community in the Turkish language. The book, which was published in the Armenian and English languages yet in 2011, encloses 700 eye-witness testimonies of the Armenian Genocide survivors. Prominent Turkish human rights advocate Ragip Zarakolu has also published the book in Turkey and attended the presentation of the book held on December 10 in Yerevan’s National Library.

Verjine Svazlian, Lead Researcher at the Institute of Archeology and Ethnography at the Academy of Sciences in Armenia, presented her research on the oral tradition of Armenian Genocide survivors, through their eye-witness testimonies and songs revealing their experience.

Svazlian’s presentation was based on the many oral histories of Armenian Genocide survivors, which she personally collected beginning in 1955 from 100 localities in Western Armenia. She undertook these efforts often at great personal risk from authorities in the former Soviet Union and Turkey.

Svazlian began collecting Genocide testimonies as a student at the Yerevan Khachatour Abovian Pedagogical University, walking door-to-door and village-to-village, searching for Armenian Genocide survivors who had been rescued. Her work is particularly valuable not only because of its volume, but because of the short amount of time that had passed since the Genocide.

Through her interviews, which Svazlian conducted in written, audio taped, and videotaped form and in different dialects and languages, she also captured testimonies about the self-defense actions that took place in several Armenian towns attacked by the Turkish military (as in Van, Shatakh, Shabin-Karahisar, Sassoun, Musa Dagh, Urfa, and others.).