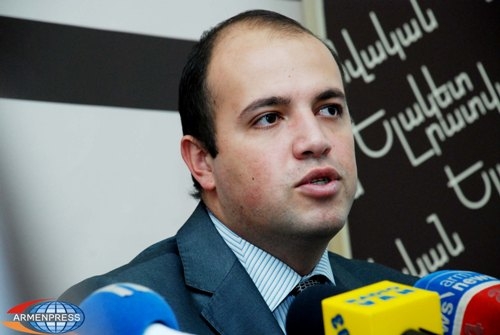 
YEREVAN, NOVEMBER 29, ARMENPRESS. The speech delivered by the President of Azerbaijan Ilham Aliyev at the Vilnius Summit apparently had different stresses and style. This time Aliyev junior was much more abstained. In his speech Ilham Aliyev touched upon the issue of cooperation for several times and emphasized the issue of peaceful settlement of the Nagorno Karabakh conflict. In a conversation with “Armenpress” political scientist Hrant Melik-Shahnazaryan stated this, who paid a visit to Vilnius to attend the Summit’s forums.

The OSCE Minsk Group Co-Chairs issued a press statement regarding the results of the recent meeting of the President of the Republic of Armenia Serzh Sargsyan and President of Azerbaijan Ilham Aliyev. In particular the statement runs as follows:

“The Co-Chairs welcomed the President of the Republic of Armenia Serzh Sargsyan and President of the Republic of Azerbaijan Ilham Aliev in Vienna, where the Presidents have arrived accompanied by the Ministers of Foreign Affairs of the two countries to continue negotiations aimed at a peaceful resolution of the NK conflict. Present at the meeting were also the Co-Chairs of the OSCE Minsk Group (Russian Federation, France, United States of America), as well as the Personal Representative of the OSCE Chairman-in-Office. This is the first meeting of the Presidents since the Summit in Sochi in January 2012. During the tête-à-tête conversation and ensuing working meeting with the participation of the Co-Chairs and Ministers, the Presidents discussed a wide range of issues pertinent to the resolution of the NK problem.

The Presidents agreed to give a new impetus to the negotiations aimed at reaching a peaceful solution. They instructed their respective Ministers of Foreign Affairs to continue to work together with the Co-Chairs towards the enhancement of the peace process, based on the registered achievements. They agreed to meet again in coming months.

As a follow up, the Co-Chairs will organize working meetings with the Ministers on the sidelines of the OSCE Ministerial Council which will take place on December 5-6 in Kiev. The Co-Chairs are planning to conduct a visit to the region before the end of this year.”