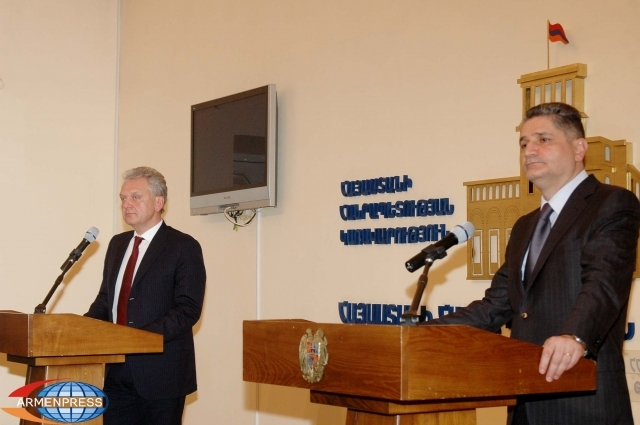 
YEREVAN, NOVEMBER 6, ARMENPRESS. The implementation of the programs of Armenia's accession to the Customs Union will not complicate but will improve the situation around Nagorno-Karabakh. The Chairman of the Eurasian Economic Commission's (EEC) Board Viktor Khristenko expressed such a viewpoint at the briefing with the Prime Minister of the Republic of Armenia Tigran Sargsyan, Armenpress reports. Viktor Khristenko assures that Nagorno-Karabakh conflict cannot be an obstacle for the implementation of the programs by the Republic of Armenia.

“At the same time, the implementation of those programs cannot complicate the situation in any way, it will rather improve it,” the Chairman of the Eurasian Economic Commission's (EEC) Board Viktor Khristenko said. He highlighted that Nagorno-Karabakh conflict has been lasting for many years and is not connected with the decision of the Republic of Armenia to join the Customs Union as there are experts for the settlement of the conflict who are engaged in the case.