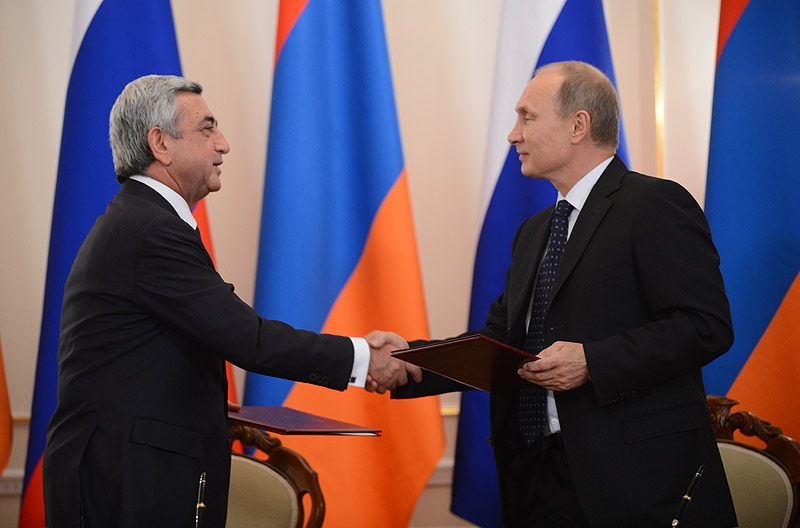 
MOSCOW, SEPTEMBER 3, ARMENPRESS: President of the Republic of Armenia Serzh Sargsyan paid a working visit to Moscow on September 3 on invitation of Russian Federation President Vladimir Putin. Presidents Sargsyan and Putin mentioned with satisfaction the positive dynamic of Armenian-Russian cooperation in political, trade-economic, cultural-humanitarian, military spheres and confirmed loyalty to the principles enshrined in treaty “About friendship, cooperation and mutual support” signed on August 29, 1997 and declaration “About strategic cooperation between Republic of Armenia and Russian federation aimed to 21st century” signed on September 26, 2006. During the negotiations the heads of the states discussed the current level of bilateral strategic partnership and its prospects, issues relating to foreign policy cooperation. The Presidents confirmed their loyalty to Nagorno-Karabakh conflict peaceful settlement in format of joint work with OSCE Minsk Group Co-Chairs, on the base of one principle formed from retraining from threat or use of force, Territorial integrity of states, equal rights and self-determination of people. In the context of joint work directed to regional stability and security was mentioned the mutual readiness of sides in further expansion of cooperation in a number of fields. The Presidents of two countries with a separate statement confirmed Armenia’s and Russia’s determination in developing integration processes in Eurasian territory.

The readiness of two countries of practical implantation of joint programs directed to strengthening energy security of Armenia, modernization and diversification of its economy was expressed. Armenian and Russian Presidents highlighted the importance of continuation of joint efforts in direction of implementation of infrastructure programs including railway connection as well as new logistic and communication ways. The importance of full realization of long-term economic cooperation program till 2020 between Armenia and Russia was stressed.

“Armenpress” was informed from public relations and information department of Armenian President’s office that in result of negotiations on September 3, 2013 in Moscow Presidents Sargsyan and Putin confirmed the aim of the Republic of Armenia and Russian Federation in direction of further development of economic integration processes in Eurasian territory. Int hat context President of the Republic of Armenia Serzh Sargsyan announced about Armenia’s decision to join Customs Union and necessity of implementation corresponding steps for that aim and in future about participating in formation of Eurasian economic union. President of Russian Federation Vladimir Putin expressed his support to the abovementioned decision of Armenia and informed about readiness of Russian side to support the process.

“Honorable Mister President, respectable representatives of media, I want to begin with gratitude word directed to Mister Putin for just ended open negotiations, atmosphere of confidence and arrangements directed to further development of Armenian-Russian relations. As it was said in constructive atmosphere together with Russian President we discussed the main issues of strategic partnership of our countries – in political, trade-economic, energy, humanitarian and other fields. Naturally we spoke about regional issues and settlement of Nagorno-Karabakh conflict. I confirmed once more Armenia’s readiness to settle the conflict exclusively peacefully on the base of principles of self-determination of people, retraining from threat or use of force, Territorial integrity of states. I re-confirmed our readiness to continue looking for solutions from crises on the base of settlement principles and elements reflected in joint statements of Russian, American and French Presidents. One of main topics of our negotiations was the necessity of infrastructure reforms in Armenia, securing modernization and diversification of oru economy where Russia is represented with many enterprises. We discussed in details on prospective directions of our cooperation. We also discussed issues relating Eurasian integration and I confirmed Armenia’s wish to join Customs Union and be involved in the process of formation of Eurasian economic union. 20 years ago Armenia together with Russia and other CIS member states formed its military security system in format of Collective security treaty. During these decades the system approved its vitality and efficiency. Today our CSTO partners form new platform of economic cooperation. I have said many times that being in a same system of military security it is impossible to isolate yourself from corresponding geo-economic territory. This is a rational decision and it comes from interests of the Republic of Armenia. This decision is not refusal from dialogue with European organizations. During these years Armenia in support of its European partners held serious institutional reforms. Nowadays Armenia in this sense is much more efficient and competitive country as it was several years ago. Ladies and gentlemen the results of our negotiations are reflected in our joint statements signed with Vladimir Putin several minutes ago. I am sure that realization of all arrangements will give new impetus to strategic allied partnership. Mister President I am grateful for warm receiption and made arrangements”.