Radio-isotope production complex to be delivered to Armenia in autumn 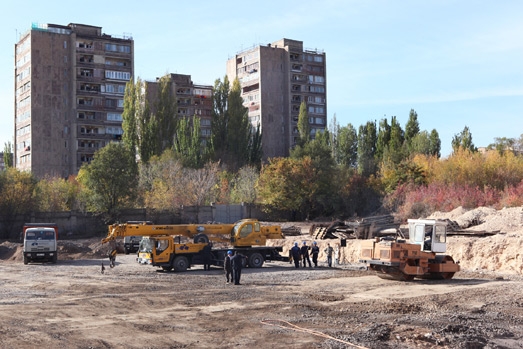 
YEREVAN, AUGUST 7, ARMENPRESS: Armenian Government will declare accreditation manager contest to secure the activity of Radio-isotopes production center which is built in Yerevan. “Armenpress” reports making a reference on official website of Armenian government that the above-mentioned issue is included in the agenda of Government’s August 8 session. The construction works of Radio-isotopes production center’s building launched in September, 2012. After construction works in the center will be located the complex of radio-isotopes production purchased from Belgian “IB A Molecular” company. It is planned to bring the complex to Armenia in autumn of current year.

According to Government’s decision was founded CJSC “Radio-isotopes production center”. The competence of managing the state shares has been given to ministry of Economy. The center must produce radioactive isotopes necessary for cancer treatment and diagnosis of cancer tumors. The produced resources will be used for biochemical test and developing images.

The program of Oncology excellence Armenian center of National Competitiveness Foundation of Armenia consists from three creation stages – production of radio-isotopes and molecular diagnosis, radiation therapy, chemotherapy and surgical oncology centers. It must be center equipped with modern technologies of prevention and treatment of oncology diseases which will provide services of nuclear diagnosis, radiation medicine, chemotherapy and surgery.