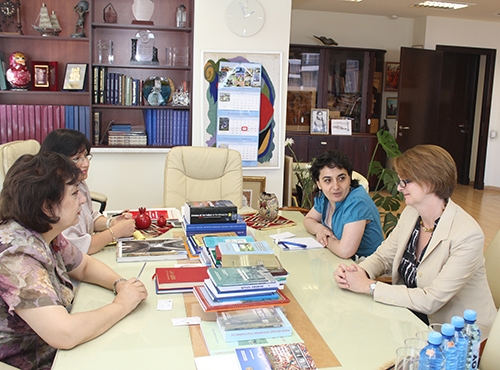 
YEREVAN, JULY 18, ARMENPRESS: Diaspora Minister of the Republic of Armenia Hranush Hakobyan hosted ambassador extraordinary and plenipotentiary of Great Britain to Armenia Catherine Jane Leach. “Armenpress” was informed from press service of the ministry that at the meeting had been present president of public organization “Center coordinating problems of Syrian Armenians” Lena Halajyan. Diaspora minister introduced to the ambassador the problems of the Syrian Armenians, position of Armenian authorities and implemented programs.

In her speech Hranush Hakobyan mentioned:”In Armenian-British relations great contribution has Armenian community in Great Britain. We have Armenians who perform themselves very actively and brightly in social, political and business life of England. During our meeting I wish to discuss the issue of Syrian Armenians which is very important and urgent. Today Syrian Armenians among other issues have more urgent problem- it is the problem of having habitation. On this occasion Armenian government has decided to provide territory in Ashtarak region to found district called “New Aleppo”. 300 Armenains are already in turn for living there. But it is not possible to cover all the costs only with the help of Government. We know that European Union spends millions of dollars for Syrians who left for Lebanon, Turkey, Jordan but Armenia has not received any help form international organizations. Second support I expect from authorities of Great Britain who also can help us to implement the foundation of that district. I hope my call will not stay without reaction”.

In her speech Catherine Jane Leach mentioned: “I am grateful for reception. I think that what does Armenian government is important. Governments of some European countries have supported Syrians and Syrian Armenians living in Armenia also need such help. I hope we will be able to help them”.