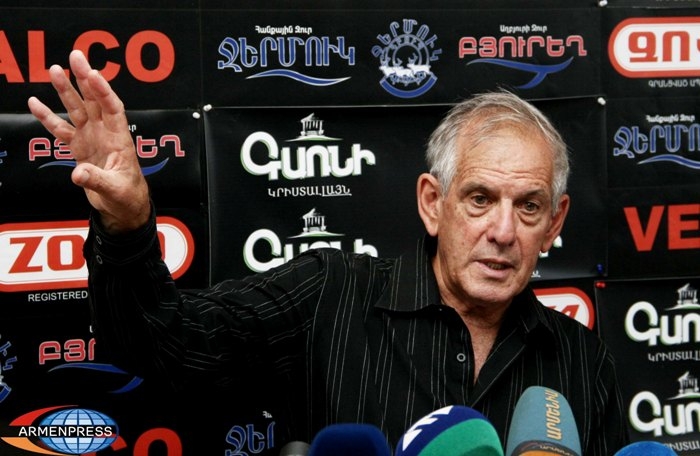 
YEREVAN, JULY 15, ARMENPRESS: The book “Banality of Indifference” of the Israeli author Yair Auron was translated into Armenian. At the press conference held on July 15 in Yerevan Yair Auron noted that for him it is very important that the book, besides the English and Hebrew, has the Armenian version as well. “I wish that in Israel too so many journalists would be so interested in the books. Today I am very excited and pleased by your presence and interest. Yesterday I met with His Holiness Karekin II, the Supreme Patriarch and Catholicos of All Armenians and we had quite an interesting conversation”, - shared his impressions the Israeli writer, as reported by Armenpress.

“Considering the Armenian Genocide to be a “prelude” to the Holocaust, the scientist accuses the modern Israeli authorities for the passive behavior”, - said Levon Ananyan, adding that Yair Auron wrote that “not suppressing and not discussing the genocides of other nations, the historic fact of the Holocaust as well is being humiliated and Israel is obliged to hold the discussion on the Armenian Genocide on the parliamentary level”.

Yair Auron was born in 1945. He is an Israeli historian, scholar and expert specializing on Holocaust and Genocide studies, racism and contemporary Jewry. Since 2005 he is the head of the Department of Sociology, Political Science and Communication, The Open University of Israel, Associate Professor. Auron studied history and sociology at Tel-Aviv University, received his MA from The Hebrew University, and Ph.D. diploma from the Université de la Sorbonne Nouvelle, Paris III, France. From 1974 to 1976 Auron worked as the Director of the Education Department, Yad Vashem, Jerusalem, in 1980's he was a researcher of the Center for Jewish Education, Hebrew University and Academic director of European Section, The Israel Diaspora Institute, Tel-Aviv University. In 1996-1999 he was a Senior Lecturer in College of Yezreel, Head of the Division of Cultural Studies. Auron is a member of the Academic Board of Directors, Zoryan Institute, Cambridge; An Associate Director and Member of the Academic Board of Directors, The Institute on the Holocaust and Genocide, Jerusalem; and an Advisory Board member of The Genocide Education Project, San Francisco.