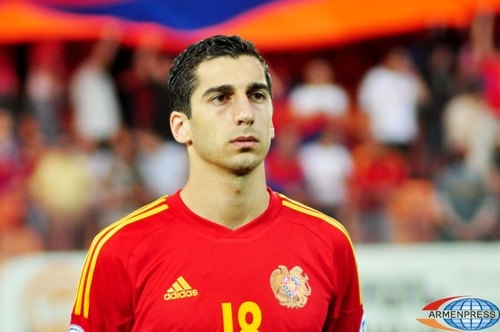 
YEREVAN, JULY 9, ARMENPRESS: The transfer of the midfielder of the Armenian National Football team Henrikh Mkhitaryan has been the most expensive deal in the history of the Borussia Dortmund. As reported by Armenpress, quoting the German Bild, before that the most expensive transfer of Borussia was made in 2001 – the move of the Brazilian Márcio Amoroso from Parma for $25 million. The German Club and the UEFA official website publish that €25 million was paid for Henrikh Mkhitaryan, though it was stated officially by the Shakhtar Donetsk this night that €27,5 million was paid for the Armenian midfielder, which makes Mkhitaryan the most expensive deal for the Borussia Dortmund.

The transfer of Henrikh Mkhitaryan is the fourth most expensive transfer during the history of the German Bundesliga. Bavaria-Munich is the initiator of all the expensive deals. In 2012 the Munich Club purchased the midfielder of Athletic Bilbao Javi Martínez for €40 million, Mario Götze from Borussia for €37 million and Mario Gomez in 2009 for €30 million.

According to transfermarkt.de, the Shakhtar got €67,5 million, yielding in this result only to FC Porto, which gained an income of €70 million. The Donetsk Club got €40 million for Fernando Luiz Roza, who moved to Manchester City and €27,5 million for the midfielder of the Armenian National Football team Henrikh Mkhitaryan.