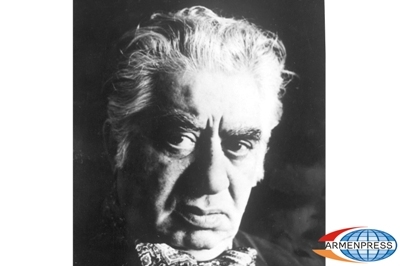 
YEREVAN, JUNE 6, ARMENPRESS: The 110th anniversary of the Honored Artist of the Armenian SSR, the Honored Artist of the RSFSR and the People's Artist of the USSR, public figure, Doctor of Arts and composer Aram Khachatryan is celebrated in Yerevan. As Armenpress was reported by the Department for Mass Media and Public Relations of the Yerevan Municipality, on the occasion of the 110th anniversary of the great composer, his son Karen Khachatryan, the Deputy Speaker of the National Assembly of the Republic of Armenia Hermine Naghdalyan, officials from the Yerevan Municipality, the participants of the Aram Khachaturyan International Competition, different artists and musicians visited the Komitas Pantheon to pay a tribute to the memory of the world-famous composer.

“Aram Khachatryan was connected with Armenia. He often visited the Republic with concerts. I did not always accompany him, but I have always felt that visible and invisible bond and his affection towards Armenia and the Armenians. He felt responsible for the Armenian nation is close to him”, - stated Karen Khachatryan, the son of Aram Khachatryan.

On behalf of the Yerevan Mayor Taron Margaryan the Head of the Department for Culture of the Yerevan Municipality Kamo Movsisyan laid a wreath at the tomb of the great composer.

Although he was born in what is now Georgia and lived most of his life in Russia, Aram Khachatryan has been an iconic figure for generations of the Armenian composers. Most of his works are saturated with centuries-old motifs of the Armenian culture. His works paved the way for new styles and daring explorations, although his own style was closely controlled by the regime. Khachatryan encouraged young composers to experiment with new sounds and find their own voices. His colorful orchestration technique, admired by Shostakovich and others in the past, is still noted for its freshness and vitality by modern composers. Khachatryan’s influence can be traced in nearly all trends of the Armenian classical traditions, whether in symphonic or chamber music.

As a conductor, Khachatryan made several commercial recordings, including a 1953 recording of his second symphony with the National Philharmonic Orchestra, a 1963 stereo recording of the symphony with the Vienna Philharmonic, and EMI recordings of suites from Gayane and Masquerade and his violin concerto in 1954 (with David Oistrakh as soloist) with the Philharmonic Orchestra. He later made stereo recordings of the violin concerto (again with Oistrakh), the second symphony in 1977 on the Russian Disc label, and music from Gayane. Some of his recordings have been reissued on CD.