Commemoration of the Armenian Genocide victims held in Istanbul: LIVESTREAM 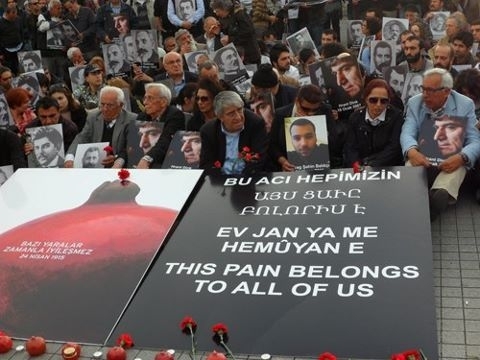 
YEREVAN, APRIL 24, ARMENPRESS. The state may deny the fact of the Armenian Genocide, but the people can direct the events in the way they want. As reports "Armenpress" one of the demonstrators stated this in the Sultan Ahmet Square in Istanbul. One of the organizers of the event stated: "Today there are fascists living in our country, notwithstanding there are also good people living in here and their number is increasing every year. The official viewpoint remains unchanged, although the people's knowledge about the reality is growing. And the event organized in Diyarbakir is to prove that."

The fact of the Armenian Genocide by the Ottoman government has been documented, recognized, and affirmed in the form of media and eyewitness reports, laws, resolutions, and statements by many states and international organizations. The complete catalogue of all documents categorizing the 1915 wholesale massacre of the Armenian population in Ottoman Empire as a premeditated and thoroughly executed act of genocide, is extensive. Uruguay was the first country to officially recognize the Armenian Genocide in 1965. The massacres of the Armenian people were officially condemned and recognized as a genocide in accordance with the international law by France, Germany, Italy, Belgium, Netherlands, Switzerland, Sweden, Russia, Poland, Lithuania, Greece, Slovakia, Cyprus, Lebanon, Uruguay, Argentina, Venezuela, Chile, Canada, Vatican, and Australia.