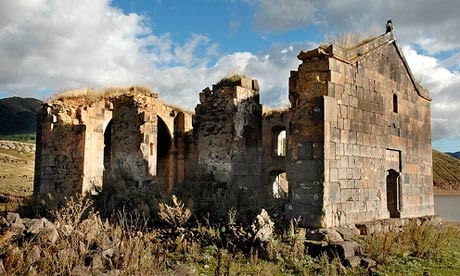 
YEREVAN, APRIL 18, ARMENPRESS: Church of St Peter and St Paul in Aragatsotn, Armenia and St George Armenian Church in Turkey  have been shortlisted as Europe's most threatened archaeological sites and landmarks for a rescue mission by heritage body Europa Nostra, reports Armenpress referring to The Guardian.

A total of 14 archaeological sites, religious buildings, historic city centres, and military fortifications have been shortlisted by Europa Nostra for 7 Most Endangered, a European heritage initiative devised to help save some of Europe's most threatened places.

The 14, selected by experts from a total of 40 nominations submitted by public bodies and organisations across 21 countries, will be whittled down to seven for the final list, to be announced at Europa Nostra's 50th Anniversary Congress in Athens on 16 June.

Church of St Peter and St Paul, Aragatsotn, Armenia is a small, isolated and dishevelled chapel -one of the world's earliest Christian structures, dating back to the fifth century AD. It is seriously endangered by regular flooding and needs urgent action if it is to be saved.

St George Armenian Church is  a derelict church in the ancient town of Mardin, Turkey. It has foundations going back to the fifth century.