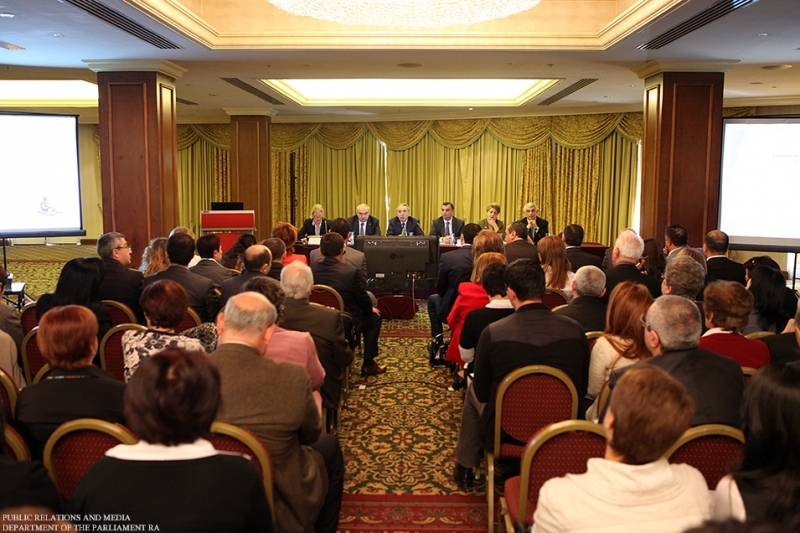 
YEREVAN, APRIL 2, ARMENPRESS: On the initiative of the Armenian NA Standing Committee on Social Affairs at Armenia Marriott hotel hearings on the package of the draft law “On Protection of the Rights of Persons with Disabilities and Their Social Inclusion” and “On Amending the RA Code on Administrative Infringements” were held on April 2.

As reports Armenpress, referring to public relations and media department of NA, aeputies, Armenian Minister of Labor and Social Affairs Artem Asatryan, representatives of the NGOs involved in the problems of the disabled and guests were invited to take part in the hearings.

As the Chairman of the NA Standing Committee on Social Affairs has noted, this is the next step on the path of the establishment of the “social state” prescribed in the Constitution of the country.

Armenian Minister of Labor and Social Affairs thanked for the organization of the hearings and for interesting discussions.

The Representative of the United Nations Children’s Fund (UNICEF) in Armenia Ms Henriette Ahrens also welcomed the guests. She has noted that the social integration of the persons with disabilities is an important policy, and the UNICEF is glad to support the government and hopes that the children also will make use of the amendments of that new model.

Armenian Deputy Minister of Labor and Social Affairs Jemma Baghdasaryan presented the RA draft law “On Protection of the Rights of Persons with Disabilities and Their Social Inclusion,” also touching upon the policy being implemented in the sphere.

Jemma Baghdasaryan has also added that in future a National Committee for the Disabled will be created, where representatives of NGOs and state bodies will be included.

The Head of the Department on Labor and Employment of the Armenian Ministry of Labor and Social Affairs Tadevos Avetisyan has presented the legal regulation of the labor and employment of the persons with disabilities within the framework of the Armenian law and has informed those present that legal norms corresponding with international standards are designed in the area of labor and protection of employment rights for the persons with disabilities by the Armenian law.

The Chairman of the Unison NGO Armen Alaverdyan has talked about the need of this law and has noticed that despite concerning elements in the law, nevertheless, the debate of the draft law is important.

The persons with disabilities attending the hearings had an opportunity to submit their proposals to the representatives of the state bodies. The questions and proposals mainly were relating to the availability of transport for the disabled, the construction of steep platforms in the high-storied buildings, the accessibility of using the lifts, the creation of jobs and the accessibility of medical services.