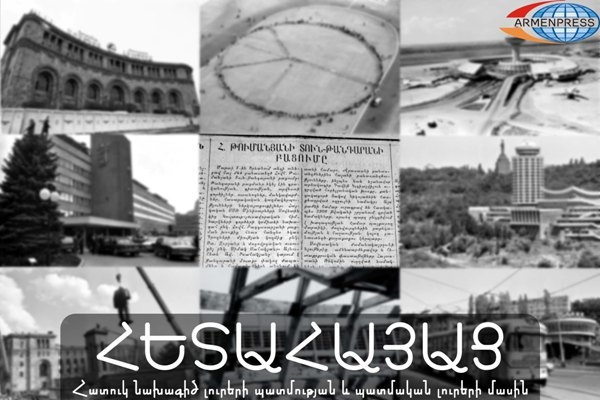 
YEREVAN, MARCH 25, ARMENRPESS. This time "Retro" exclusive project introduced by "Armenpress" on the news history and historical news is dedicated to popular and beloved writer Hovhannes Tumanyan's museum. The day we touch upon this issue has not been chosen accidentally: in few days the museum will celebrate its 60th anniversary. On April 5, 1953, "Soviet Armenia" newspaper gladly announced about that significant and interesting event.

The museum was to become one of the unique places, where the Armenian people can appear in the poet's home, encounter his art, and feel his vital energy.

Under the direct guidance of the First Secretary of the Communist Party of the Armenian SSR Grigory Arutyunov a decision was made to build a museum in Yerevan in order to preserve the literary and material heritage of the poet on the occasion of his 80th anniversary in 1949. The chief constructor of Yerevan Grigor Aghababyan was the author of the first building project.

In a conversation with "Armenpress" the first guide of the museum Varsik Grigoryan stated that Ruben Zaryan accompanied her during her first visit to the museum in 1952. Among other things she stated: "I cherish joyful memories about that house, because it was looking like a big Armenian family with its traditions and warm atmosphere, where aristocracy and intelligence reigned." (THE FULL VERSION OF THE ARTICLE IS AVAILABLE IN ARMENIAN)

Photos by Arevik Grigoryan and the museum archive