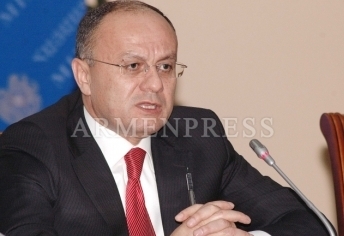 
YEREVAN, JANUARY 18, ARMENPRESS: Armenian Air  Force  is  ready to ensure the safety of Stepanakert airport. Seyran Ohnayan, Minister of Defense of the Republic of Armenia  dwelled on Azerbaijani continuous threats regarding  Stepanakert Airport in the briefing with the journalist on January 18.

''The  Armenian Air Force will provide the operation and the flight of the civil aircraft '' Minister Ohanyan came forth with, Armenpress reports.

Stepanakert airport was built in 1974 and mostly hosted flights from Yerevan and Baku. In 1992 the airport  ceased its activities. In 2008 work began on the construction of a new passenger terminal resembling that of  an stretched wings eagle. In the course of this period of time the runway was also expanded, besides they smoothed runway adjacent several hills aimed at adoption of modern type aircrafts.