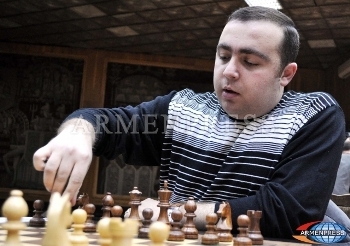 
YEREVAN, JANUARY 10, ARMENPRESS. The current chess champion of Armenia Tigran Petrosyan will spare no effort to keep his title. In a conversation with "Armenpress" twice Olympic champion approved his intention. In Tigran Petrosyan's opinion the Chess Championship of Armenia is among the most difficult ones in the world. The Olympic champion stated: "Unquestionably, it will not be easy. There are always at least 5-6 chess players in this championship, who deserve victory. Notwithstanding, I will spare no effort to keep my title."

The national chess championship of the Republic of Armenia launched on January 12. The Chess Federation of Armenia informed "Armenpress" that the tournaments of the highest league of the Armenian men's 73rd and women's 68th championships will last until January 21, 2013. The abovementioned tournaments are be held in Yerevan.

Armenian men's 73rd tournaments kicked off on January 12 at 15:00 o’clock (Yerevan time). Armenian Chess Grandmaster Tigran Petrosyan was declared the winner of the previous championship, which was held in 2012. He was involved in the Armenian National Chess Team and became Chess Olympic Champion in the chess Olympiad held in Istanbul.