New clashes in Aleppo: the rebels attempted to penetrate into several Armenian districts 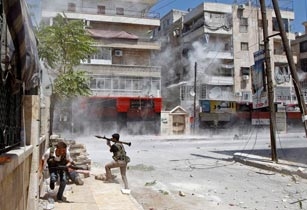 
YEREVAN, OCTOBER 25, ARMENPRESS. Contrary to the peaceful situation in Aleppo lasting already several days today a heavy shooting was heard in the morning. Spokesman of the National Primacy of Aleppo Jirayr Reisyan said this in a conversation with "Armenpress" adding that the rebels attempted to penetrate into several districts, where a lot of Armenians live. Reisyan also added that even now one can hear shooting, but there is no information about the damage or human casualties. The Army does its best to repulse the rebels.

Talking about the clashes in Ashrafie district Reisyan said that there are few Armenians living there and that one of the most peaceful districts is now engaged in violent clashes. As to the New Village district, then the most dangerous there are snipers, but fortunately there are no casualties yet.

The humanitarian aid from Armenia to Syria is still in the airport and they are doing everything to take it out of there.

Reisyan informed us that for the security reasons all the schools of the Armenian National Primacy are still closed. But some schools are still partially working.

The Armenians from Damascus informed "Armenpress" that the situation in the central districts of the capital is calm. But everything in the city is under the strict surveillance, all vehicles are being searched. In the far districts of Damascus the situation is tense, although nothing extraordinary happened yet.

Facebook profile of "Aleppo News Network" says that the rebels were forced to go back to the French hospital from Sryan district. There are snipers settled inside the buildings of Ashrafie district.

The clashes in Syria lasting more than 18 months caused the death of 30,000 men, including four dozens of Armenians.