Rare findings dating back to the 6th millennium B. C. have been dug out in Masis hill | ARMENPRESS Armenian News Agency

Rare findings dating back to the 6th millennium B. C. have been dug out in Masis hill 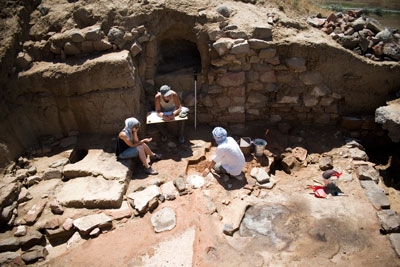 
YEREVAN, OCTOBER 24, ARMENPRESS. The excavation of 37 different monuments has been undertaken by the National Institute of Archeology and Ethnology of the National Academy of Sciences of the Republic of Armenia and the results are satisfying. As the director of the Institute Pavel Avetisyan mentioned in the conversation with "Armenpress" not only excavations, but testing and research have been executed in those ancient places. Excavations in 10 archeological units are still being carried out. He said: "This year we have carried out excavation in Masis hill nearby Yerevan, which is a monument dating back to the Stone Age and probably the most part of the hill was devastated during 1970s, but the layers are still safe. The Armenian-American expedition has already discovered the constructions with round plan and dug out a large amount of instruments from bones and stones."

According to Pavel Avetisyan among other things one unique finding has been discovered and depictions on its surface tell us about the fact that probably it belongs to the first half of the 6th millennium B. C. Notwithstanding, this should be proved by an exploration.

As the Director of the National Institute of Archeology and Ethnology of the National Academy of Sciences of the Republic of Armenia archeological works in Areni Cave are still in process, although currently the expedition is more focused on the procedure of settlement of the group.

Archeological excavations have been initiated in a number of Armenian capitals of various periods like Yervandashat, Artashat, Armavir and Dvin.