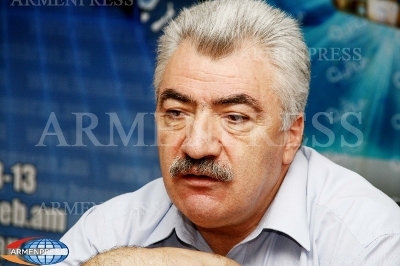 - In what stage the digitalization works of the National Archive are and how many materials have been digitized by now?

- How does the digitalization process of the films and photos go?

- Concerning the cinema-, photo-, phono-documents, due to the digitalization equipment, obtained from France, we have already digitized 2,013 documentaries. The digitalization process of the Armenian production feature films is carried out according to the agreement signed with Armenfilm Movie Studio, in the framework of which 415 movies will be digitized. The National Archive of Armenia intends to digitize the Armenian movies of the Soviet time, which are currently preserved in Mosfilm Film Studio. At present we can announce that all the issues of the Soviet Armenia documentaries of 1940-1982 have been digitized. 3,742 photo storage units have been digitized by now, which were on glass base. The process is very laborious and demands professional skills. 1,519 phono-documents have been digitized, including the recordings of the National Assembly sessions of 1989-1997. Every year the National Archive of Armenia is supplemented with new documents, which conditions the continuation of the documents' digitalization process.

- What programs do you plan to implement next year?

- In 2013 it is intended to establish the optimization program of the territorial subdivisions of the Archive and begin its implementation, as well as establish an internal computer network between the Archive and the territorial subdivisions, publish the Archive's documents related to the Armenian Genocide dated to its 100th anniversary, translate them into foreign languages and continue the digitalization process.

- What problems does the Armenian National Archive have?

- One of the problems of the National Archive, demanding urgent settlement, is the upgrading of the computer equipment, installation of ventilation system in the archive depositories of the territorial subdivisions, implementation of waterproofing works in the underground archive depositories and other technical upgrades.