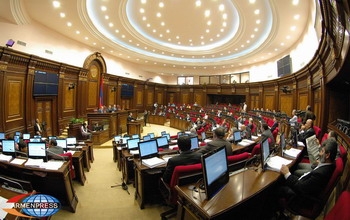 
YEREVAN, SEPTEMBER 5, ARMENPRESS: Armenian National Assembly accepted  ''the adoption of the statement by NA of the Republic of Armenia on extradition of criminal  by Hungarian authorities and granting pardon by Azerbaijani President ''. Armenpress reports that National Assembly's Foreign Affairs Committee Chairman Artak Zakarian stated that the text of the statement was discussed with all factions who made efforts to come to an overall conclusion: the draft was elaborated on the basis of the held discussions. Ninety six for , one against and no abstained voices accepted the text of the statement containing the following:

-Dwelling on cruel and inhuman crime perpetrated against  Armenian Armed Forces officer Gurgen Margaryan by Azerbaijani  Ramil Safarov in 2004 February 19, in Budapest in the course of NATO's " Partnership for Peace "program.

-Pointing out Hungary Government as a host country did no ensure the safety of participants in the course of international events organized in the territory of its country .

-Recording that Armenian officer assassinate was from time  to time  justified and  finally gifted by hero rank at a high level , reportedly Hungarian law making bodies just could not be unaware and could predicate the transfer of life sentenced criminal meant granting him peace and create a precedent  encouraging crimes  against Armenians on ethnic basis.

-Noting that granting various awards and titles to the criminal by Azerbaijani  President is a manifestation  of political cynicism towards the international community, qualifying  Aliyev step contradiction to ''Extradition of prisoners'' Convention’s humanitarian universal human rights principles and norms ,National Assembly announces:

1.The Hungarian government also bears responsibility for what happened, condemnation to Hungarian authorities adopted stance and suspension of official relations with Hungary at a Parliamnerat level.

3. Entrenched hatred atmosphere towards Armenians at a state level in Azerbaijan reaffirms the fact NKR cannot be a part of Azerbaijan.

4.Calls on the countries’ Governments led by democratic values, condemn deal between Hungary and Azerbaijan perpetratred on August 31.

5.Looking forward to commensurate response by the international parliamentary organizations.

Exchange of point of views on the controversial points of the draft  is being held.